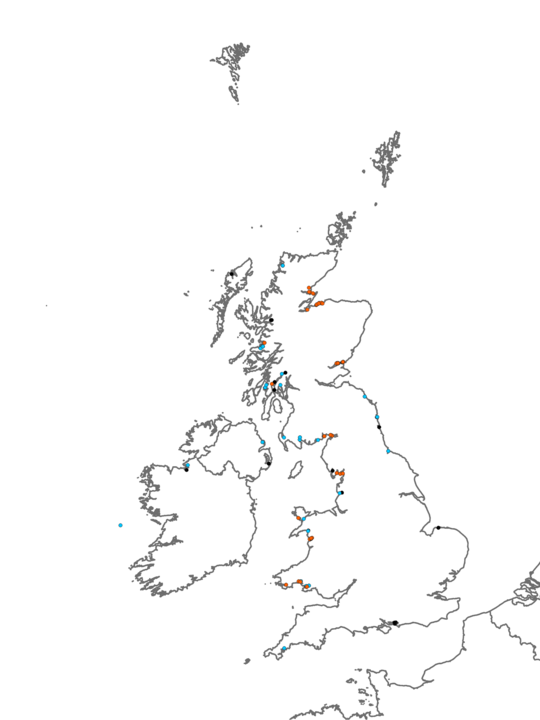 Fine to very fine muddy sand on the mid shore at the lower extreme of estuaries, and in moderately exposed and sheltered bays and marine inlets, sometimes subject to variable salinity. The infauna is characterised by the polychaetes Eteone longa, Hediste diversicolor (ragworm) and Pygospio elegans, oligochaetes (mostly Tubificoides benedii and T. pseudogaster), the crustaceans Corophium volutator and Crangon crangon, the spire shell Hydrobia ulvae and the baltic tellin Macoma balthica. The cockle Cerastoderma edule may be abundant, and the sand gaper Mya arenaria may be superabundant, though these species are not always present, or may be missed in core samples due to their large size. The polychaetes Arenicola marina, Polydora cornuta and Capitella capitata, the shrimp Crangon crangon, and the Mussel Mytilus edulis are sometimes present.

HedMacEte can occur on the mid shore of sheltered, lower estuaries, with the MEST communities in muddier sediments on the lower shore. Under moderately exposed conditions in lower estuaries and towards open coasts, it may occur alongside other muddy sand biotopes such as CerPo or BatCare.

These biotopes occur in slightly more exposed, marine sediments which lack a silt/clay fraction. The principal infaunal difference is the absence of C. edule and M. balthica.

Occurs in less saline, more sheltered muddy conditions on the lower shore, further towards the head of estuaries. There is a greater diversity of polychaetes, M. balthica is not always present, but Scrobicularia plana occurs in high densities.

Occurs lower down on the shore, in muddier sediments. H. diversicolor occurs only occasionally, but Nephtys hombergii tends to be abundant. Tubificoides spp. are common.

Occurs in similar environmental conditions, though on more sheltered coasts and only rarely where there is freshwater influence. H. diversicolor is absent, and fewer mollusc species are present. M. arenaria and H. ulvae do not occur.

Occurs in less saline, more sheltered muddy conditions on the lower shore, further towards the head of estuaries. P. elegans occurs less frequently, Streblospio shrubsolii is abundant. The only molluscs that occur are occasionally common Hydrobia ulvae and S. plana.