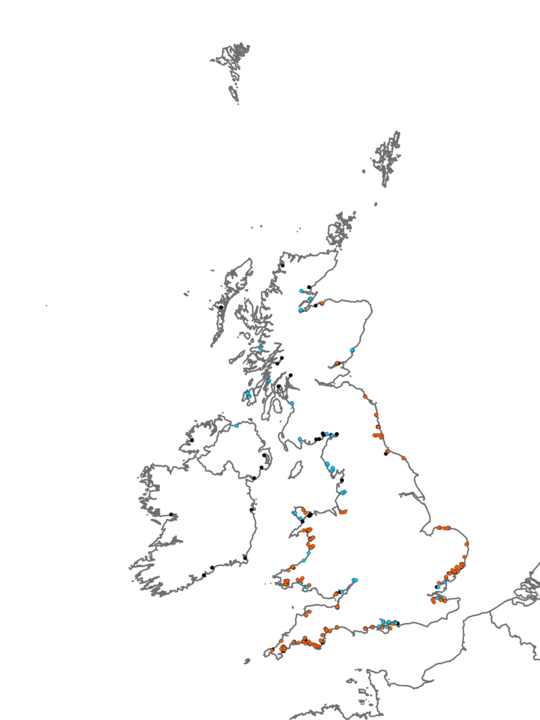 Mud and sandy mud shores in sheltered marine inlets and estuaries subject to variable or reduced salinity. The biotope is typically found on the mid and lower shores in the upper and mid estuary. If present on the upper shore, the sediment may become firm and compacted as water drains out, though usually the biotope occurs lower on the shore and the sediment remains water saturated during low tide. An anoxic layer occurs within the upper 5 cm of the sediment. The infauna is dominated by abundant or superabundant ragworms Hediste diversicolor. Other species that occur in a significant number of samples include oligochaetes such as Heterochaeta costata and Tubificoides spp., polychaetes such as Streblospio shrubsolii and Manayunkia aestuarina, the mud shrimp Corophium volutator, and the spire shell Hydrobia ulvae.

Hed may occur on the same shores as HedMac, HedMacScr, or NhomAph. Higher up on the shore, and/or further towards the upper extreme of the estuary, Tben may occur.

Enteromorpha spp. and Ulva lactuca may form mats on the surface of the sediment during the summer months, particularly in areas of freshwater influence and/or where there is nutrient enrichment.

Occurs on slightly more marine shores, in sediments with a smaller sand fraction, with a higher diversity of polychaete and oligochaete species. C. volutator is absent.

Occurs in similar physical environments. The infauna of this biotope is more diverse, most notably a range of bivalves occur, including the baltic tellin Macoma balthica, in addition to H. diversicolor and the occasionally abundant C. volutator.

Occurs in slightly muddier sediments and lower salinities, further towards the head of estuaries. The species assemblage is much poorer, consisting only of oligochaetes and, in some cases, Capitella capitata. H. diversicolor does not occur.

Occurs in similar physical environments. The infauna of this biotope is more diverse, characterised by a range of polychaetes including the ragworm H. diversicolor and a range of bivalves including the baltic tellin M. balthica and the peppery furrow shell Scrobicularia plana.