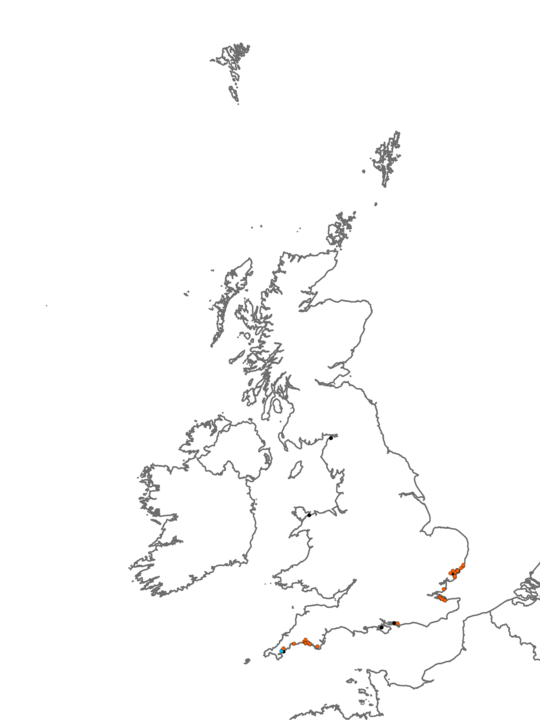 Soft wet mud with a fine sand fraction, on the mid and lower shore of sheltered estuaries, usually with an anoxic layer present within the first 5 cm of the sediment. The infauna is relatively poor, dominated by the polychaetes Nephtys hombergii, Streblospio shrubsolii, and Aphelochaeta marioni. The oligochaete Tubificoides benedii is also characterising for this biotope, and Hediste diversicolor may be common.

NhomStr may occur on the same shores as the MEST biotopes, Hed.Cvol or Hed.Str. Higher up on the shore, and/or further towards the head of the estuary, Hed.Ol may occur, changing to Tben at the upper extreme of the estuary.

Occurs in very similar, but often slightly less saline conditions, further towards the head of estuaries. The species assemblage is poorer, consisting virtually only of oligochaetes and abundant H. diversicolor.

Tends to occur lower on the shore, in sediments with a greater sand fraction and often subject to more wave exposure, possibly lower down in estuaries. The polychaete assemblage is more diverse, and both Hydrobia ulvae and Macoma balthica are typically present. It is the presence these two species that primarily distinguishes NhomMacStr from similar estuarine mud biotopes.

Tends to occur in slightly less saline, more sheltered conditions, with a higher abundance of H. diversicolor and a greater range of polychaete and oligochaete species. A. marioni is absent.

Occurs over a greater range of shore heights, often on slightly less exposed shores, with an increased infaunal diversity. H. diversicolor is more abundant, and, most notably, the bivalves M. balthica and Scrobicularia plana are abundant.

Occurs on slightly more exposed shores, with a reduced infaunal diversity. H. diversicolor and Corophium volutator are the only characterising species.