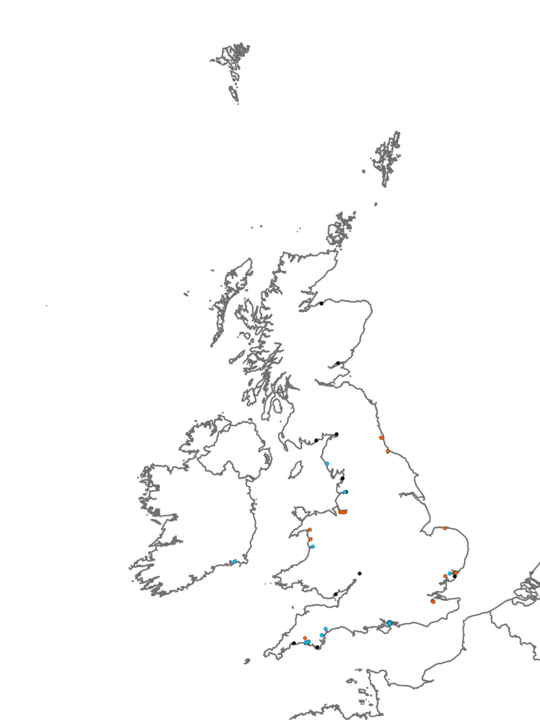 Extreme upper estuarine fine sandy mud, sometimes with a fine sand fraction, in very sheltered conditions and subject to reduced salinity. An anoxic layer is usually present within the upper 3 cm of the sediment. The infaunal community is extremely poor, consisting almost exclusively of oligochaetes, including Tubificoides benedii and, more rarely, Heterochaeta costata. The only polychaete species that may occur is Capitella capitata, which may be common. The sediment may form steep banks in upper parts of macro-tidal estuaries or along saltmarsh creeks. Vaucheria species may form a film on the sediment surface along such creeks, and juvenile shore crabs Carcinus maenas may be common. At the very upper end of estuaries, the oligochaetes Limnodrilus spp. and Tubifex tubifex may be found.

There are three oligochaete dominated upper estuarine mud biotopes. Tben is the most extreme upper estuarine biotope, occurring at the head of estuaries where there is no strong river flow and hence conditions are very sheltered, and there is a very strong freshwater influence. Further towards the mid estuary, this biotope may occur at the top of the shore, with Hed.Ol further down. NhomStr occurs furthest towards the mid estuary, or on the lower shore with Hed.Ol and Tben higher up.

Green algae such as Enteromorpha spp. may form mats on the surface of the mud during the summer months.

Can occur in estuarine coarse sediments on lower shores where strong river flow leads to the absence of a mud fraction. The infauna is similarly poor, dominated by oligochaetes including enchytraeids, and nemerteans.