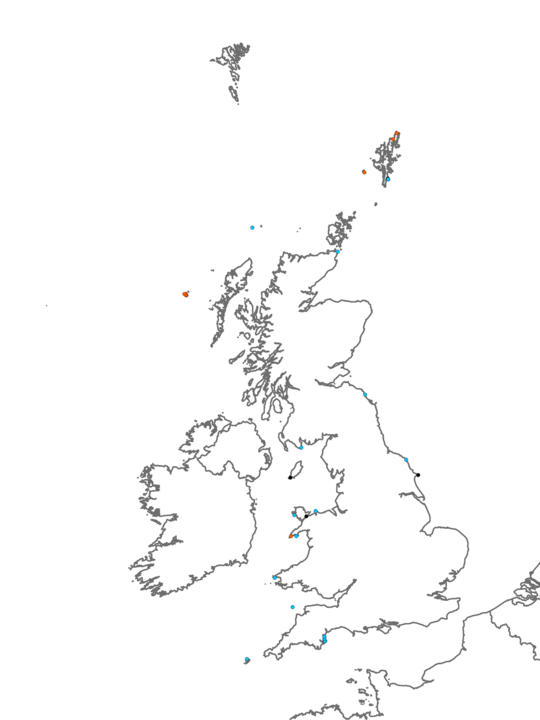 Highly mobile and scoured boulders and cobbles found on cave and gully floors and which often appear bare. Where there is sufficient light and stability, however, the boulders are encrusted by coralline algal crusts. Barnacles Balanus crenatus and keelworms Pomatoceros triqueter may survive in areas protected from severe abrasion. Crabs such as Cancer pagurus and Carcinus maenas may occur, often beneath and between the rocks, along with the gastropod Calliostoma zizyphinum. The anemone Actinia equina may be present in low numbers.

The slightly less-scoured walls often found above this biotope in caves and gullies are generally characterised by a similar, but richer community of scour-tolerant Balanus crenatus, Pomatoceros triqueter, coralline crusts and spirorbid worms (CC.BalPom). This impoverished biotope may form an intermediate between barren gravel and slightly more stable larger pebbles and cobbles which are covered by algae that are often found in the mouths of caves (FoSwCC).

Winter storms periodically mobilise the boulders and cobbles, causing abrasion to any seasonal biota that may have developed over the calmer summer months.

Occurs in similar conditions as CC.Mob but has a higher species diversity and has a high abundance of the brown seaweed Desmarestia aculeata.

Severely scoured vertical infralittoral rock with B. crenatus and/or P. triqueter with spirorbid worms and coralline crusts. Often occurs on nearby vertical rock.