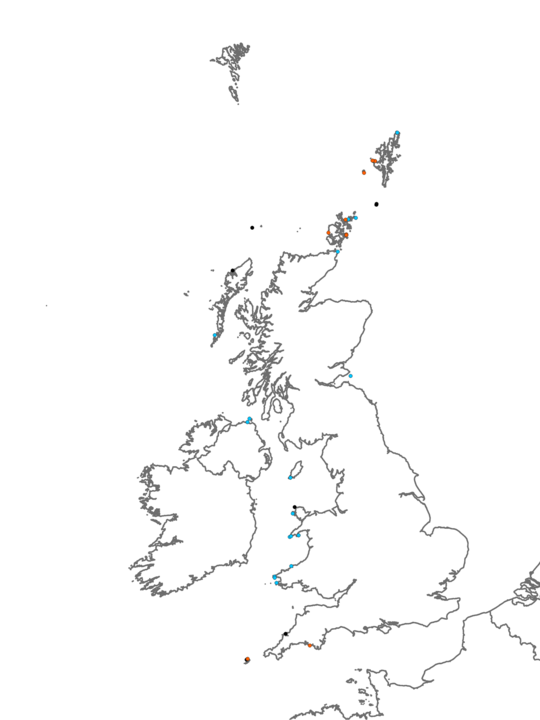 This biotope is found on steep wave-surged entrances to gullies and caves and on unstable boulders in the entrance to caves and gullies. The rock may be abraded by the movement of the boulders and cobbles in heavy surge and tends to be dominated by dense foliose seaweeds that grow rapidly in the calmer summer months. Beneath the foliose seaweeds the rock surface is typically covered with coralline crusts, which are longer-lived, and tolerant of abrasion. The flora of this biotope is relatively varied, depending upon the amount of light and degree of abrasion or rock mobility with red seaweeds such as Cryptopleura ramosa, Plocamium cartilagineum, Odonthalia dentata, Callophyllis laciniata, Phycodrys rubens, Hypoglossum hypoglossoides, Phyllophora crispa and Corallina officinalis. The brown seaweed Dictyota dichotoma also occurs in these conditions, since it is tolerant of some sand scour. During the summer months small fast-growing kelp plants can arise in this biotope, although the mobility of the substratum prevents the kelp from forming a kelp forest. Dense swathes of very young kelp such as Laminaria hyperborea are, however, not uncommon. The faunal community consist of the anemone Urticina felina, the sponge Halichondria panicea and the ascidian Dendrodoa grossularia. More mobile fauna include the echinoderms Asterias rubens and Echinus esculentus, the top shell Gibbula cineraria and the crab Cancer pagurus.

Further into the cave or gully, beyond the dense red seaweeds of FoSwCC, the vertical rock grades to either an ascidian and sponge dominated community or sponge crusts and anthozoans (CrSpAsAn/CrSpAsDenB). Further into the cave or gully the floor and any boulders or cobbles are generally scoured clean or may support coralline encrusting algae (CC.Mo). Above the red seaweeds, steep rock surfaces often support a kelp community (LhypR or Lhyp) or in shallower water Alaria esculenta is usually present (Ala.Myt).

This biotope occurs in a similar depth and conditions as FoSwCC, though LsacSac often occurs further away from the cave / gully entrance on larger boulders. As such, the greater (relative) stability of the boulders allows the opportunistic kelps to survive long enough to form a forest. 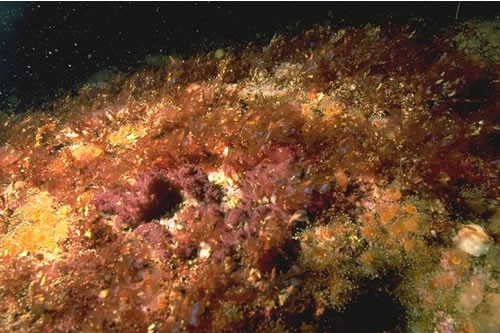