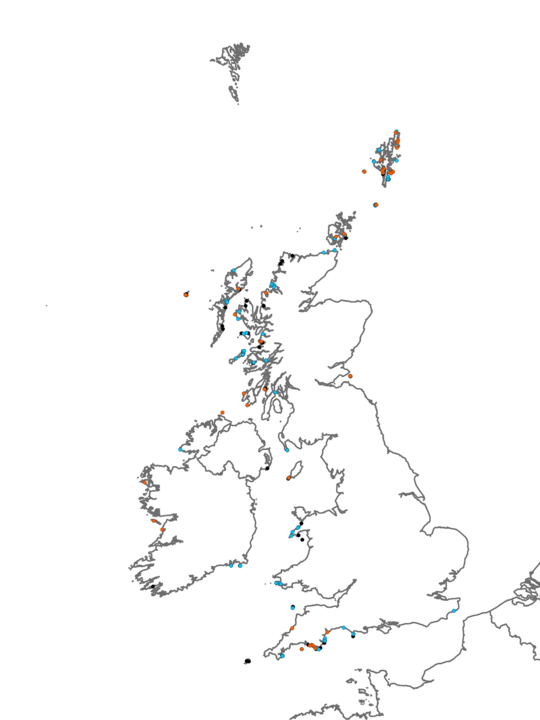 A forest or park of the fast-growing, opportunistic kelps Laminaria saccharina and/or Saccorhiza polyschides often occurs on seasonally unstable boulders or sand/pebble scoured infralittoral rock. The substratum varies from large boulders in exposed areas to smaller boulders and cobbles in areas of moderate wave exposure or nearby bedrock. In these cases, movement of the substratum during winter storms prevents a longer-lived forest of Laminaria hyperborea from becoming established. This biotope also develops on bedrock where it is affected by its close proximity to unstable substrata. Other fast-growing brown seaweeds such as Desmarestia viridis, Desmarestia aculeata, Cutleria multifida and Dictyota dichotoma are often present. Some L. hyperborea plants may occur in this biotope, but they are typically small since the plants do not survive many years. The kelp stipes are usually epiphytised by red seaweeds such as Delesseria sanguinea and Phycodrys rubens. Other red seaweeds present beneath the kelp canopy include Plocamium cartilagineum, Nitophyllum punctatum, Callophyllis laciniata and Cryptopleura ramosa. Encrusting algae often form a prominent cover on the rock surfaces, including red, brown and coralline crusts. Faunal richness and diversity is generally low compared to the more stable L. hyperborea kelp forest and park communities (LhypR). Where some protection is afforded the anthozoan Alcyonium digitata can occur in addition to the more robust species such as the tube-building worm Pomatoceros triqueter. Mobile species include the to shell Gibbula cineraria and Calliostoma zizyphinum and the sea urchin Echinus esculentus. The hydroid Obelia geniculata and the bryozoan Membranipora membranacea can often be found colonising the kelp fronds.

This biotope can be found below the L. hyperborea zone (LhypFa or LhypR), especially where close to a rock/ sand interface (where it is subject to sand/pebble scour in winter). Where this biotope occurs on bedrock, not scoured by mobile sediment, it is thought to occur as a result of intense wave action in winter storms which is too severe to allow L. hyperborea to develop and remain in shallow water.

Due to the disturbed nature of this biotope there can be significant changes in the structure of the community. Coralline and brown algal crusts with sparse kelp plants generally dominate areas that have been recently disturbed. Diversity is low and a few species of fast-growing seaweeds can dominate the seabed. A longer established community will have larger, mixed kelp plants and a greater diversity of red seaweeds.

Occurs at similar conditions but at slightly less exposed coasts. The brown seaweed Desmarestia aculeata has a higher abundance (Abundant) than in LsacSac, while the kelp L. saccharina has a lower abundance (Occasional). The kelp S. polyschides rarely occurs.