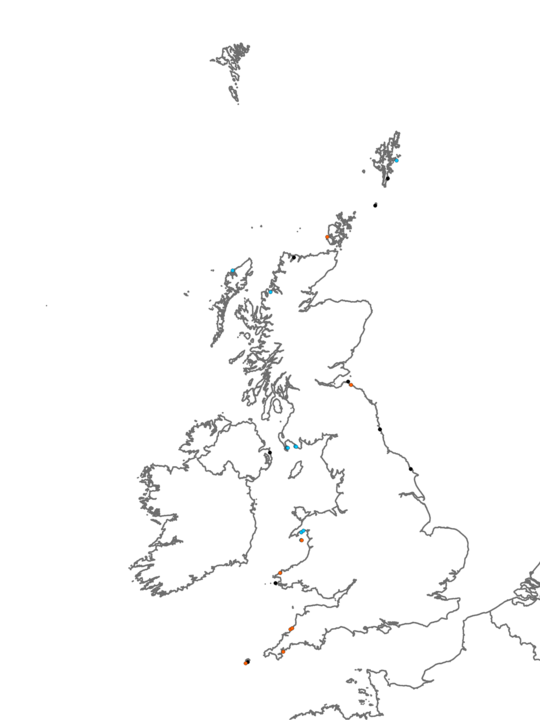 Wave-exposed seasonally mobile substrata (pebbles, cobbles) dominated by dense stands of the brown seaweed Desmarestia aculeata and/or Desmarestia ligulata. Infralittoral pebbles and cobbles that are scoured through mobility during storms, but become stable in the summer allowing the growth of such algae as Desmarestia spp. Filamentous red seaweeds such as Bonnemaisonia asparagoides and Brongniartella byssoides are usually present. Stunted individuals of the kelp such as Laminaria hyperborea and Laminaria saccharina may be present where bedrock is available. A variety of foliose red seaweeds such as Cryptopleura ramosa, Chondrus crispus, Plocamium cartilagineum, Hypoglossum hypoglossoides and Nitophyllum punctatum may on occasion be present underneath the kelp canopy. Other red algae including Corallina officinalis, Rhodomela confervoides and coralline crusts including Lithothamnion spp. may be present as well as well as the foliose brown seaweed Dictyota dichotoma and the green Enteromorpha intestinalis. Due to the nature of this biotope the faunal component is very impoverished though the gastropod Gibbula cineraria can be found among the cobbles.

Often a narrow zone on mixed substrata below a stable zone of kelp on bedrock. Where seasonally mobile substrata affect nearby bedrock this biotope may occur in place of kelp forest.

Occurs on bedrock at slightly more exposed coasts. The kelp Saccorhiza polyschides has a higher abundance (Abundant), while the brown seaweed D. aculeata has a lower abundance (Occasional) than in DesFilR.

Occurs at similar conditions but at slightly more exposed coasts. The two kelps Laminaria saccharina and S. polyschides has a higher abundance (both Common), while the brown seaweed D. aculeata has a lower abundance (Occasional) than in DesFilR.

Occurs in similar conditions as DesFilR but has a very low species diversity and lacks the brown seaweed D. aculeata.