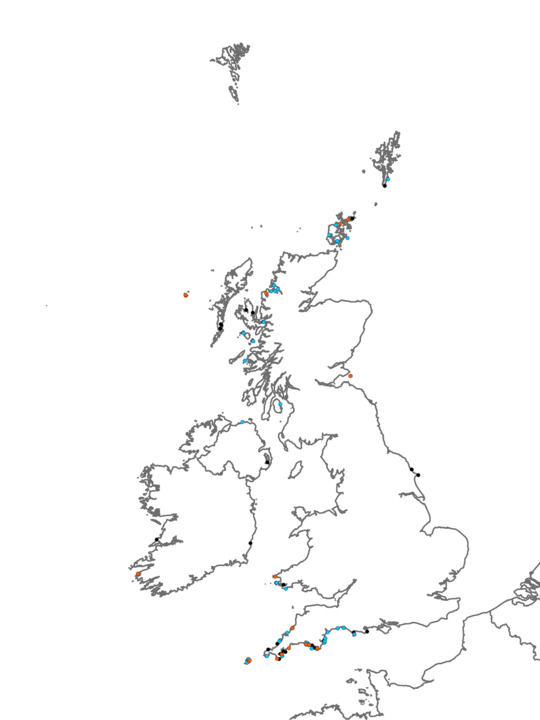 Exposed low-lying reefs in the sublittoral fringe or upper infralittoral (generally above 5m depth), mainly in the southwest and west, dominated by the kelp Saccorhiza polyschides. This opportunistic coloniser replaces Laminaria digitata or Laminaria hyperborea as the dominant kelp, following 'disturbance' of the canopy. This may be the result of storms, when loose sediment and even cobbles or boulders are mobilised, scouring most seaweeds and animals from the surrounding rock. As S. polyschides is essentially a summer annual (occasionally it lasts into a second year), it is also particularly common close to rock/sand interfaces which become too scoured during winter months to prevent the longer-living kelps from surviving. As a result of the transient nature of this biotope, its composition is varied; it may contain several other kelp species, including L. digitata, Laminaria saccharina and Alaria esculenta, at varying abundances. Laminaria spp. sporelings can also be a prominent feature of the site. Beneath the kelp, (scour-tolerant) red seaweeds including Corallina officinalis, Kallymenia reniformis, Plocamium cartilagineum, Chondrus crispus, Dilsea carnosa and encrusting coralline algae are often present. Foliose red seaweeds such as Callophyllis laciniata, Cryptopleura ramosa and Palmaria palmata also occur in this biotope. P. palmata and Delesseria sanguinea often occur as epiphytes on the stipes of L. hyperborea, when it is present. The foliose green seaweed Ulva spp. is fast to colonise newly cleared areas of rock and is often present along with the foliose brown seaweed Dictyota dichotoma. Due to the disturbed nature of this biotope, fauna are generally sparse, being confined to encrusting bryozoans and/or sponges, such as Halichondria panicea and the gastropod Gibbula cineraria.

On some shores (for example in Cornwall and south-west Ireland), S. polyschides competes so effectively with the other laminarians that it forms a well-defined zone in shallow water, between the L. digitata (Ldig) and L. hyperborea zones (LhypR and Lhyp). Elsewhere, it is found at sites that have been physically disturbed, removing areas of established kelp (L. hyperborea) thus allowing this opportunistic biotope to develop over a short space of time.

There may be significant variations in this biotope over time, as by its very nature, it is dominated by many fast-growing annual seaweeds. The foliose green seaweed Ulva sp. is fast to colonise newly cleared areas of rock and can be present as a dense growth on the rock around the Saccorhiza polyschides. Similarly, large patches of Laminaria spp. sporelings may be present at times.

This biotope occurs in deeper water and often forms a mixed kelp canopy of L. saccharina, L. hyperborea and S. polyschides. Although S. polyschides can occur in equal abundance to the other kelps it may be absent altogether from some sites. It supports a slightly richer faunal community of species commonly found in deeper water, such as Alcyonium digitatum, Caryophyllia smithii and encrusting bryozoans.