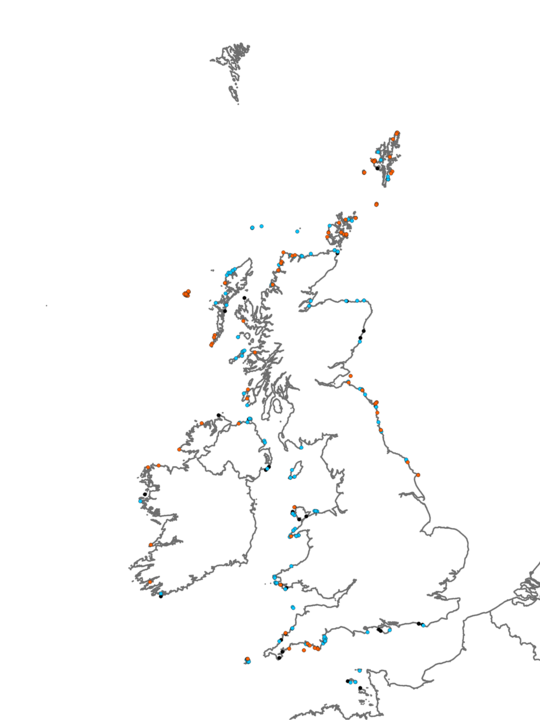 Infralittoral rocky habitats subject to strong wave surge conditions, as found in surge gullies and shallow caves, and typically colonised by faunal communities of encrusting or cushion sponges, colonial ascidians, short turf-forming bryozoans, anthozoans, barnacles and, where there is sufficient light, red seaweeds. These features usually consist of vertical bedrock walls, occasionally with overhanging faces, and support communities which reflect the degree of wave surge they are subject to, and any scour from mobile substrata on the cave/gully floors. The larger cave and gully systems, such as found in Shetland, Orkney, the Western Isles and St Kilda, typically show a marked zonation from the entrance to the rear of the gully/cave as wave surge increases and light reduces. This is reflected in communities of anthozoans, ascidians, bryozoans and red seaweeds near the entrance, leading to sponge crust-dominated communities and finally barnacle and spirorbid worm communities in the most severe surge conditions. Gully/cave floors usually have mobile boulders, cobbles, pebbles or coarse sediment. The mobile nature of the gully/cave floors leads to communities of encrusting species, tolerant of scour and abrasion or fast summer-growing ephemeral species. The lower zone of the gully side walls are also often scoured, and typically colonised by coralline crusts and barnacles.

On open rocky coasts with moderate or greater wave action.

Has a more prominant kelp and seaweed component.