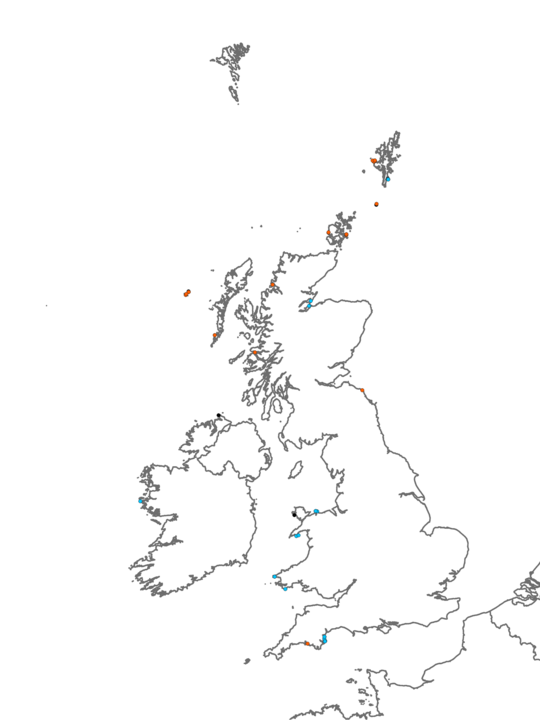 Severely scoured bedrock in wave-surged caves, tunnels or gullies often looks rather bare, and may be characterised by a limited scour-tolerant fauna of Balanus crenatus and/or Pomatoceros triqueter with spirorbid polychaetes. In areas where sufficient light is available, encrusting coralline algae and non-calcareous crusts cover the rock surface, giving a pink appearance. This biotope most commonly occurs at the bottom of walls in caves and gullies, where abrasion by cobbles and stones is severe, especially during winter. In some gullies, extreme scouring and abrasion produces a narrow band of bare coralline algal crust at the very bottom of the walls, with a band of P. triqueter and or B. crenatus immediately above. In some caves extreme wave surge at the back of the cave leads to a zone of this biotope which may also be dominated solely by sprorbids or by the barnacle Verruca stroemia. Other scour-tolerant species, such as encrusting bryozoans may also be common. Crevices and cracks in the rock provide a refuge for sponge crusts, small Mytilus edulis and occasional Actinia equina, Urticina felina and Sagartia elegans. More mobile fauna is usually restricted to the echinoderm Asterias rubens and the crab Cancer pagurus. During periods of relative stability in the summer, small quantities of foliose red seaweeds and opportunistic kelps may occur where sufficient light is available; the seaweeds however do not dominate (compare with FoSwCC).

Generally occurs at the base of walls in caves and gullies, but in extreme surge may occur as a zone at the back of caves. Immediately above this zone a variety of biotopes may occur depending on the proximity to the cave/gully entrance. Typically sponge crusts and ascidians with a hydroid-bryozoan turf will occur in the outer to mid section (CrSpAsAn, CrSpAsDenB); sponge crusts and dense ascidians in the outer to rear section (DenCcor); and low-growing sponge crusts at the rear of caves (CrSp). At some sites, CC.BalPom can form a zone towards the rear of the cave, beyond the sponge crust zone.

This biotope occurs in surge gully entrances on bedrock. It is less scoured which allows foliose seaweeds develop.