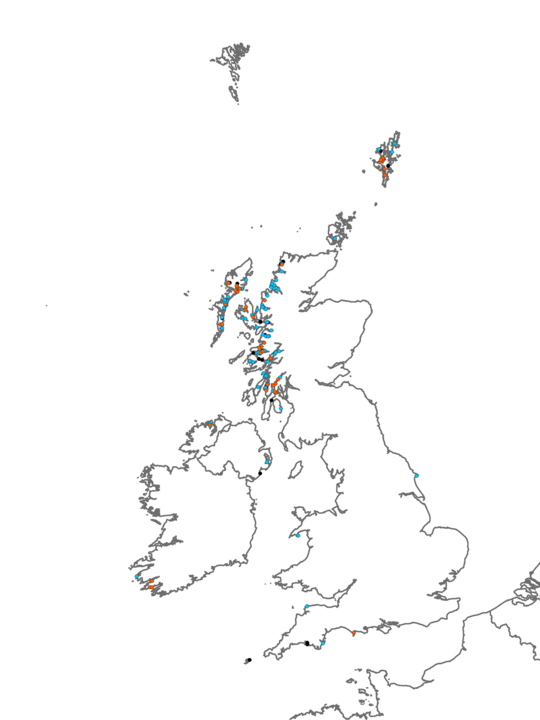 Silty bedrock or boulders with a Laminaria saccharina park (often the cape-form). Beneath the canopy, the rock is covered by encrusting coralline algae, and the urchin Echinus esculentus is often present. Due to the amount of silt cover on the rock and the reduced light intensity beneath the broad-fronded kelp, only a few red seaweeds typically survive, the most common species being Phycodrys rubens, Delesseria sanguinea, Bonnemaisonia spp. and Brongniartella byssoides. The brown seaweeds Dictyota dichotoma and Cutleria multifida may be present in low abundance. Compared to the kelp forest zone above (Lsac.Ft) both the kelp and other seaweeds are sparse (Occasional). The most conspicuous animals are large solitary ascidians, particularly Ascidia mentula and Ciona intestinalis, together with the smaller Clavelina lepadiformis. In general, the faunal component of this biotope is similar to other sheltered kelp biotopes and includes a variety of mobile crustaceans such Carcinus maenas and Pagurus bernhardus, the keelworm Pomatoceros spp., terebellid worms, echinoderms Asterias rubens, Ophiothrix fragilis and the featherstar Antedon bifida. The hydroid Kirchenpauria pinnata, although only rare is often found in the kelp park along with the top shell Gibbula cineraria and the barnacle Balanus crenatus.

L. saccharina park can be found below a similar forest (Lsac.Ft) where suitable hard substrata exist or on isolated rock exposures surrounded by sediment communities. It may also occur below a zone of mixed Laminaria hyperborea and L. saccharina forest (LhypLsac). L. saccharina can also form a band below L. hyperborea forest (Lhyp.Ft) where some shelter from wave-action is afforded with depth (L. saccharina is not tolerant of surge), or more likely where L. hyperborea has been grazed out (below Lhyp.GzFt) since L. saccharina grows far quicker than L. hyperborea. Where such a narrow band occurs it is generally less silted than that found below Lsac.Ft in much more sheltered conditions. A range of sheltered circalittoral biotopes may occur on any deeper rock below (e.g. AntAsH, AmenCio and ModHAs).

L. saccharina and L. hyperborea co-dominantes this biotope (both Frequent). Generally less silted than Lsac.Pk and there tends to be a greater variety of species, particularly more red seaweeds.

Occurs in shallower water where L. saccharina is typically Abundant and there is a greater variety and higher abundance of red seaweeds.

This biotope is very impoverished even compared to Lsac.Pk and the kelp may be absent altogether. The diversity of red seaweeds are much lower than in the park with a dominance of Corallinacea (Common) even though small turf of foliose red seaweeds and brown seaweeds like Desmarestia spp. and Chorda filum may occur. Halichondria panicea (Rare) is the likely to be only sponge present compared to Lsac.Pk, which have a higher diversity of sponges (Porifera).