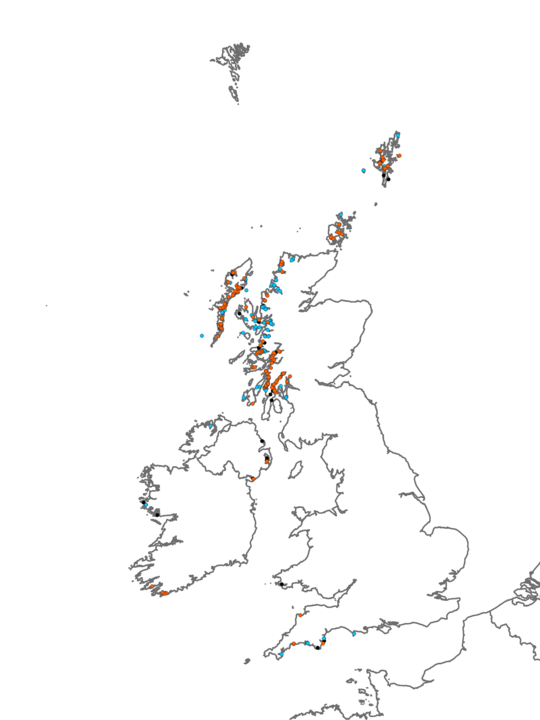 Sheltered to extremely sheltered sublittoral fringe and infralittoral bedrock, boulders and cobbles characterised by a dense canopy of the kelp Laminaria saccharina. In such sheltered conditions, a distinct sublittoral fringe is not always apparent and this biotope can therefore extend from below the Fucus serratus zone (Fserr) into the upper infralittoral zone, though there may be a mixed L. saccharina and Laminaria digitata zone (Lsac.Ldig) in between. There is a relatively low species diversity and species density due to a combination of heavy siltation of the habitat and the lack of light penetrating through the dense kelp canopy. Only a few species of red seaweeds are present compared with Lsac.Ldig or LhypLsac. The most commonly occurring red seaweeds are Delesseria sanguinea, Phycodrys rubens, Bonnemaisonia hamifera and coralline crusts. Brown seaweeds are also sparse and generally comprise Chorda filum and ectocarpoids. At extremely sheltered sites, where there is a heavy silt cover on the rock and the kelp fronds, the sub-flora is reduced to a few specialised species able to tolerate these conditions, such as the cartilaginous seaweeds Polyides rotundus and Chondrus crispus. Ascidians such as Clavelina lepadiformis, Ascidiella aspersa and Ascidia mentula can remain prominent in such conditions, often occurring on steep or vertical rock which is subject to less siltation. The variety of red seaweeds is further reduced where grazers such as the urchin Echinus esculentus and the top shell Gibbula cineraria are present. The keelworm Pomatoceros triqueter, the crab Carcinus maenas and the hermit crab Pagurus bernhardus can be present. Geographical variations: Northern sites: in sheltered sealochs the most conspicuous fauna in these forests are the large solitary ascidians Ciona intestinalis, Ascidiella spp. and A. mentula which tend to occur in greater abundance than in the mixed kelp forests (LhypLsac). In common with mixed forests, echinoderms are consistently present in low abundance: the featherstar Antedon bifida, common starfish Asterias rubens, the brittlestar Ophiothrix fragilis and the urchin Echinus esculentus are typically present. Saddle oysters Pododesmus patelliformis and chitons Tonicella marmorea can occur in high abundance at some sites. The anthozoan Anemonia viridis is often more prevalent at the extremely sheltered sites. The communities of the sheltered voes and sounds of Shetland and Orkney are similar to those present in the mainland sealochs. Southern sites: Sheltered infralittoral rock is not commonly found outside of the fjordic sealochs. In south-west Britain, where sublittoral rock does occur in shallow marine inlets, the waters are more turbid than in the sealochs, generally limiting kelp to the sublittoral fringe zone. Echinoderms are rare or absent from the south-western L. saccharina forests. A far greater diversity of red seaweeds is associated with the south-western sites: Palmaria palmata, Gracilaria gracilis, Phyllophora pseudoceranoides, Cystoclonium purpureum, Rhodophyllis divaricata, Ceramium nodulosum and Polyneura bonnemaisonii typically occur.

Although this biotope may occur below a mixed kelp canopy that occupies the sublittoral fringe (Lsac.Ldig or Ldig.Ldig) at some sites it extends directly into the sublittoral fringe and abuts the F. serratus zone (Fserr or FserX on mixed substrata). Where suitable hard substrata are available, the L. saccharina diminishes in abundance (typically Frequent) with increasing depth to form kelp park (Lsac.Pk).

This biotope occurs in similar conditions as Lsac.Ft, but is generally less silted. It is dominated by the kelp L. hyperborea (Abundant) and has a lower abundance of L. saccharina (Common) than Lsac.Ft. There tends to be a greater variety of species, particularly more red seaweeds in LhypLsac.Ft.

The variety of red seaweeds is reduced where grazers such as the urchin E. esculentus (Frequent) and the brittlestar Ophiothrix fragilis (Occasional) are present in high numbers. Grazing pressure can reduce the rock beneath the kelp canopy to coralline encrusted rock, with only a few tufts of foliose seaweeds present. 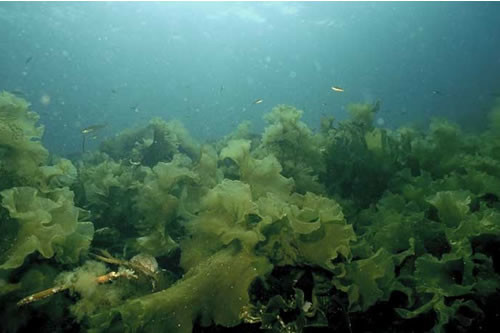 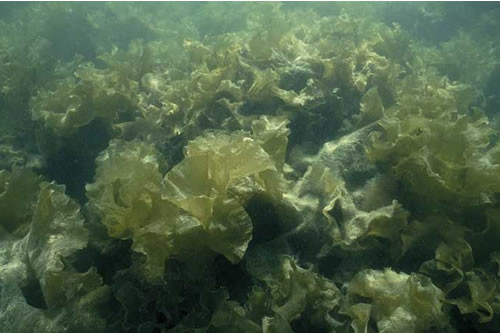