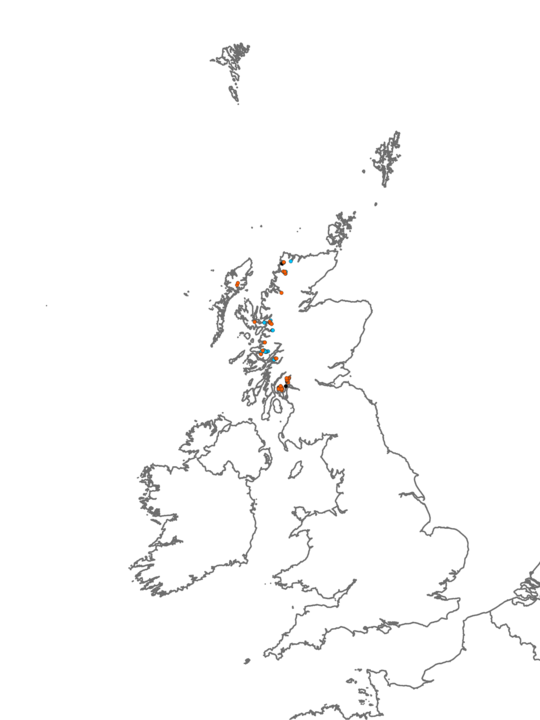 Sheltered bedrock, boulders and cobbles, in areas of reduced salinity, with kelp Laminaria saccharina, and depauperate coralline-encrusted rock supporting few foliose seaweeds but many grazing urchins Psammechinus miliaris and Echinus esculentus. The coralline crusts are typically Lithothamnion glaciale, while the brown crusts can be Pseudolithoderma extensum. Encrusting polychaetes Pomatoceros triqueter, resistant to the grazing, are also present on most of the rock. The grazing fauna are a significant component of this biotope; large numbers of P. miliaris are typically present, although where absent the brittlestar Ophiothrix fragilis may occur. Other grazers prevalent on the rock include the chiton Tonicella marmorea, the limpet Tectura testudinalis and the gastropod Gibbula cineraria. A combination of grazing pressure and lowered salinity maintains a low diversity of species in this biotope, with foliose and filamentous seaweeds generally absent or reduced to small tufts by grazing. In stark contrast to the range of seaweeds present in the L. saccharina forests (Lsac.Ft) the only red seaweed consistently found in this biotope is Phycodrys rubens. The range of fauna is similarly low, with a conspicuous absence of hydroids and bryozoans. Bedrock and boulders provide a firm substrate on which ascidians Ciona intestinalis and Ascidia mentula and the bivalve Modiolus modiolus can attach. The crabs Pagurus bernhardus and Carcinus maenas can usually be found here, though Necora puber typically is absent due to the brackish conditions. The starfish Asterias rubens along with the whelk Buccinum undatum can be present. The substratum on which this biotope occurs varies from bedrock to boulders or cobbles on sediment. The kelp band is relatively narrow and shallow (upper 5 m) compared to Lsac.Ft, although the grazed coralline encrusted rock extends deeper. This depth limit becomes shallower towards the heads of the sealochs. Geographical distribution This biotope is restricted to the west coast of Scotland, usually near the head of fjordic sealochs, which are influenced by freshwater run-off.

If the grazing pressure is reduced (i.e. a decrease in the number of grazing echinoderms present) there may be an increase in filamentous and foliose seaweeds although the diversity will remain low compared to full saline sites. 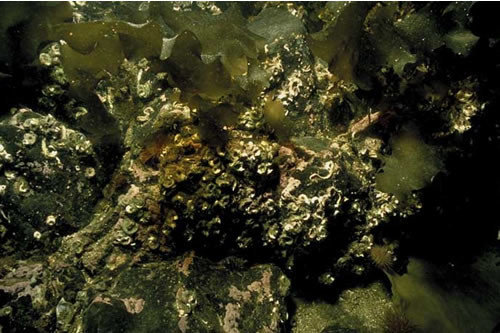 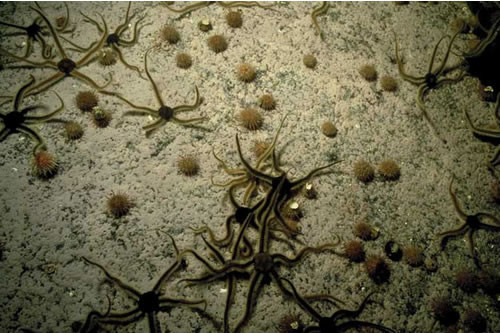 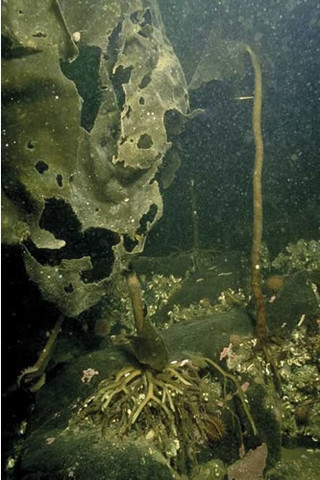