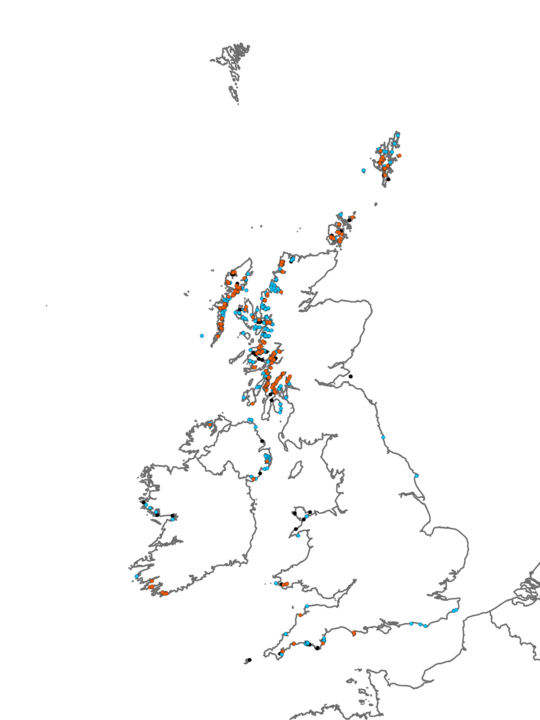 Very sheltered infralittoral rock dominated by the kelp Laminaria saccharina. Typically very silty and often with few associated seaweeds due to siltation, grazing or shading from the dense kelp canopy. The most commonly occurring red seaweeds are Delesseria sanguinea, Phycodrys rubens, Bonnemaisonia hamifera and coralline crusts. In addition to the kelp the brown seaweed Chorda filum and Ectocarpaceae are often present. As well as lacking Laminaria hyperborea, the Lsac biotopes have fewer foliose and filamentous red seaweed species by comparison to LhypLsac biotopes. A depauperate assemblage of animals is present (by comparison to Lhyp.Ft and Lhyp.Pk) predominantly consisting of the encrusting polychaetes Pomatoceros triqueter, the crabs Carcinus maenas and Pagurus bernhardus and the ubiquitous gastropod Gibbula cineraria. The echinoderms Antedon bifida, starfish Asterias rubens, brittlestar Ophiothrix fragilis and urchin Echinus esculentus occur in low abundance. Ascidians are commonly found in all the Lsac biotopes, but the large solitary ascidian Ascidia mentula are most prolific in very sheltered conditions of L. saccharina forests (Lsac.Ft). This biotope is most commonly associated with the sheltered fjordic sealochs of Scotland where sublittoral hard substrata can be found at the sheltered head of the lochs. Similarly the sheltered loughs of Ireland (Lough Hyne, Strangford Lough and Carlingford Lough). It is also found where suitable hard substrata exist in the sheltered inlets of south-west Britain, such as Milford Haven or Plymouth Sound. 4 variants has been described: A mixture of L. saccharina and Laminaria digitata (Lsac.Ldig), dense L. saccharina forest in the upper infralittoral (Lsac.Ft), sparse L. saccharina in the lower infralittoral (Lsac.Pk) and urchin-grazed (Lsac.Gz).