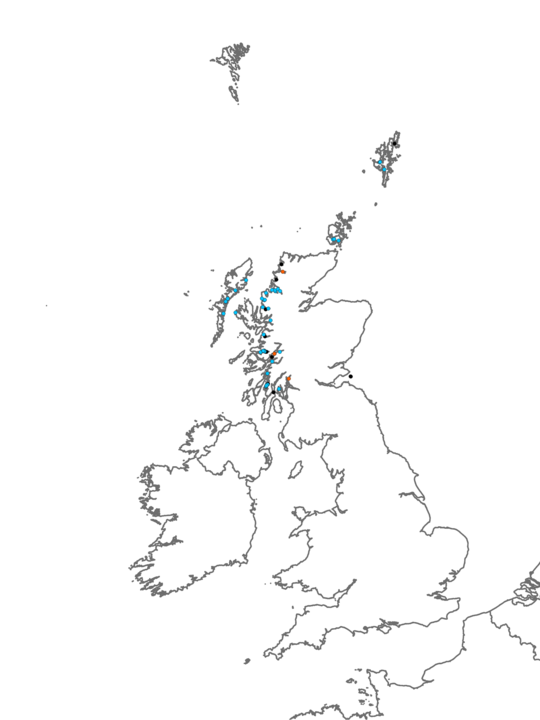 Coralline encrusted rock with scattered tufts of red seaweed and a relatively high abundance of grazing echinoderms which typically include the urchin Echinus esculentus and/or the brittlestars Ophiothrix fragilis or Ophiocomina nigra. The rock often looks bare, with few conspicuous species present although Laminaria saccharina may occur it is generally in low abundance (Rare or Occasional). The red seaweeds, reduced to small tufts through grazing, include Phycodrys rubens, Delesseria sanguinea and Brongniartella byssoides and although these seaweeds also occur in Lsac.Pk they are far less frequent in this biotope. Brown seaweeds, such as Desmarestia viridis, Chorda filum and Cutleria multifida, may be present. Grazing molluscs, such as Gibbula cineraria and can be common. Under-boulder habitats can harbour the crabs Necora puber and Pagurus bernhardus, terebellid polychaetes and the polychaete Pomatoceros spp. with ascidians Ascidia mentula. and Clavelina lepadiformis on the open rock along with the echinoderm Asterias rubens and the hydroids Kirchenpauria pinnata and Obelia dichotoma.

This biotope generally occurs on rock below a dense kelp forest of L. saccharina (Lsac.Ft) or mixed kelp (LhypLsac.Ft).

If the grazing pressure is reduced (i.e. a decrease in the number of grazing echinoderms present) a richer kelp community may develop (Lsac.Pk or LhypLsac.Pk).

This biotope a higher diversity and abundance of red seaweeds. Lsac.Pk also have a notable presence of sponges (Porifera), which are usually absent in Lsac.Gz.

Occurs in deeper more exposed sites and has a similar grazed crustose appearance but lacks the red and brown seaweeds of Lsac.Gz.