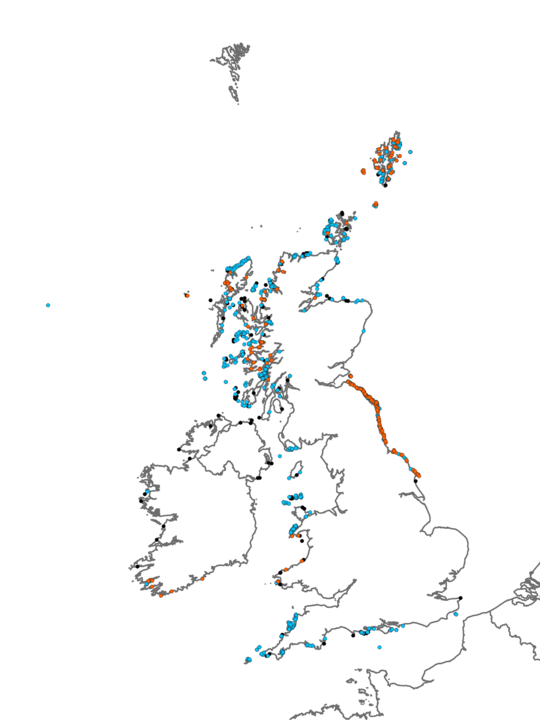 This biotope typically occurs on the vertical and upper faces of wave-exposed and moderately wave-exposed circalittoral bedrock or boulders subject to mostly moderate to weak tidal streams (a variant of this biotope containing brittlestar is found on bedrock, boulders and cobbles). The biotope is dominated by faunal (e.g. Parasmittina trispinosa) and algal (Corallinaceae) crusts, and tends to have a grazed appearance; this may be partially attributable to the abundance of Echinus esculentus found in this biotope. Occasionally, the rock may appear pink from a distance, due to the expanses of encrusting red algae on the rock surface. Alcyonium digitatum is one of the few species to stand erect from the encrusted rock surface and are frequently encountered, on the tops of rocky outcrops and boulders. Hydroids do not form a prominent feature of this biotope, with only robust species such as Abietinaria abietina frequently recorded. Sponges and Caryophyllia smithii are rarely present while erect bryozoans and ascidians are scarce (although there are exceptions, see variants). The E. esculentus grazed substratum may be interspersed with other encrusting species such as the polychaete Pomatoceros triqueter and the saddle oyster Pododesmus patelliformis. Other species present include Asterias rubens, Ophiothrix fragilis, Urticina felina, Ophiocomina nigra, Pagurus bernhardus, Flustra foliacea, Gibbula cineraria, Calliostoma zizyphinum, Ophiura albida, Ciona intestinalis and Antedon bifida. Six variants of this biotope have been recorded. FaAlCr.Flu is dominated by the silt and scour tolerant bryozoan F. foliacea. FaAlCr.Adig is dominated by A. digitatum. FaAlCr.Sec is dominated by Securiflustra securifrons. FaAlCr.Pom looks extremely impoverished (even for a grazed community). FaAlCr.Bri has a dense covering of brittlestars while FaAlCr.Car is only found under weak/very weak tides and is dominated by C. smithii. 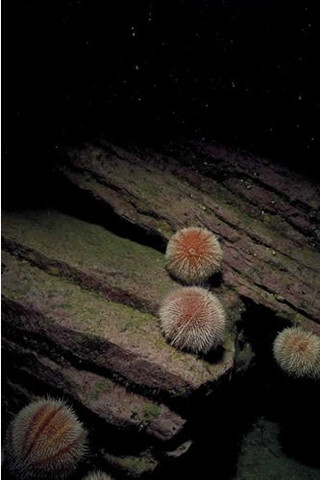 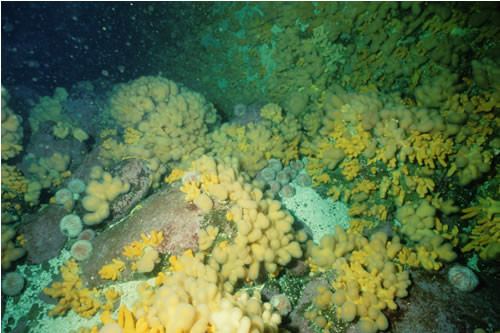