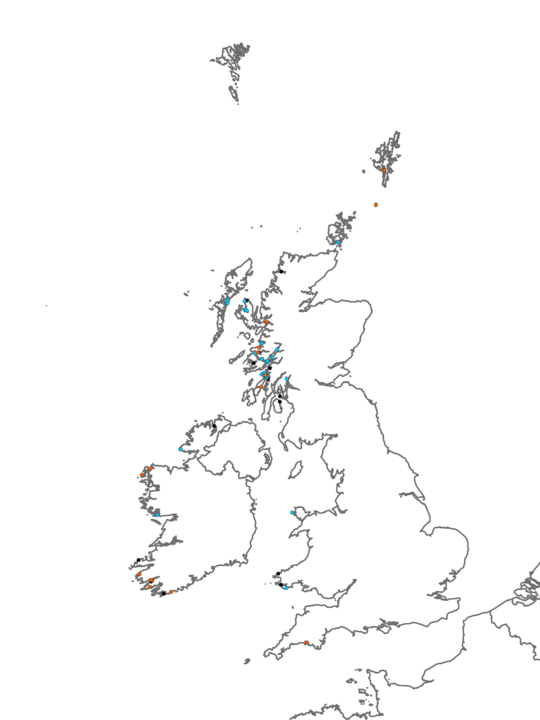 Sheltered silted, bedrock and boulders with a park of mixed Laminaria hyperborea and Laminaria saccharina. Both kelp species are sparse in the park (Frequent). Beneath the often 'cape-form' kelp canopy, foliose red seaweeds such as Delesseria sanguinea, Cryptopleura ramosa, Heterosiphonia plumosa and Brongniartella byssoides are often present at high densities on the silted rock. Other red seaweeds such as encrusting coralline algae, Phycodrys rubens, Callophyllis laciniata, Bonnemaisonia asparagoides and Plocamium cartilagineum can be present. Other brown seaweeds include Dictyota dichotoma and Desmarestia aculeata. The animal component of this biotope is generally richer than the upper infralittoral mixed kelp forest (LhypLsac.Ft). A variety of hydroids such as Obelia geniculata grow epiphytically on the kelp fronds along with the bryozoan Membranipora membranacea. The echinoderm Antedon bifida and ascidians such as Clavelina lepadiformis attach to the kelp stipes, above the silted rock. The rock itself supports anthozoans such as Caryophyllia smithii and Urticina felina as well as the tube-building polychaete Pomatoceros triqueter and the crap Necora puber. Grazers include the prominent echinoderm Echinus esculentus and the gastropods Gibbula cineraria and Calliostoma zizyphinum. Where pockets of sediment occur, there may be an increase in infaunal species such as the burrowing anthozoan Cerianthus lloydii, the brittlestar Ophiura albida, and starfish Asterias rubens. Although there is a decrease in the number of algal species in the kelp park, the abundance remains relatively high.

These mixed kelp parks are generally found below the mixed kelp forest (LhypLsac.Ft) where there is a continuation of suitable hard substrata present. These sheltered kelps are also frequently found on bedrock or boulder exposures (XFa) adjacent to sediment seabed characterised by infaunal species. Where silted, circalittoral rock occurs below the kelp park a variety of biotopes may be found characterised by varying amounts of featherstars, anthozoans, solitary ascidians and sponge communities (e.g. AntAsH, LgAsSp, AmenCio, NeoPro and ModHAs).

Found in shallower water, above the kelp park where both kelp species and red seaweeds occur in greater abundance. The fauna is generally less diverse in the forest than in the park.

Found in shallower water above the kelp park, but this biotope has a lower abundance of foliose red seaweeds due to the presence of more grazing echinoderms. The kelps L. hyperborea and L. saccharina has a typically abundance of Common.