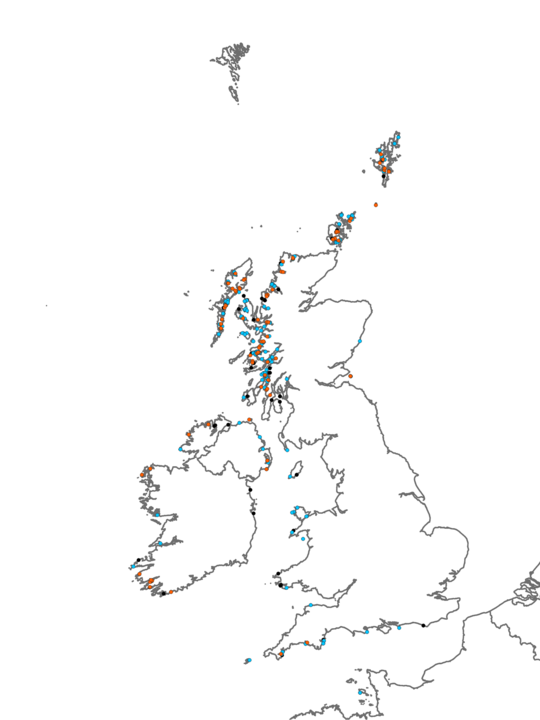 Mixed Laminaria hyperborea and Laminaria saccharina on bedrock and boulders in sheltered infralittoral habitats. Typically subject to weak tidal streams and rather silty conditions. Beneath the kelp is an associated under-storey flora of foliose red seaweeds including Plocamium cartilagineum, Cryptopleura ramosa and Callophyllis laciniata as well as the brown seaweeds Dictyota dichotoma, Cutleria multifida and Desmarestia aculeata. The stipes of L. hyperborea may be densely covered with red seaweeds such as Phycodrys rubens and Delesseria sanguinea as well as the solitary ascidian Clavelina lepadiformis and the featherstar Antedon bifida. The fronds are often epiphytised by the hydroid Obelia geniculata and the bryozoan Membranipora membranacea. Beneath the kelp canopy, the faunal component is generally less diverse than the more exposed kelp forests, dominated by the echinoderms Echinus esculentus and Asterias rubens, but the tops shells Gibbula cineraria and Calliostoma zizyphinum can be common as well. The crab Necora puber and the brittlestar Ophiothrix fragilis can be found in cracks and crevices, while the tube-building polychaete Pomatoceros triqueter and coralline crusts are present on the rock surface. Although there is a reduced number of species by comparison to the more exposed L. hyperborea forests (Lhyp.Ft), there are considerably more algae species than occur in the more sheltered L. saccharina forests (Lsac.Ft). This biotope is predominately found in the shelter of fjordic sealochs in Scotland. Where it does occur in south-west Britain the mixed kelp forest may also include the southern kelp Laminaria ochroleuca. Three variants has been described: The kelp forest in the upper infralittoral (LhypLsac.Ft), grading to a kelp park with increasing depth (LhypLsac.Pk) as well as a grazed variant (LhypLsac.Gz).