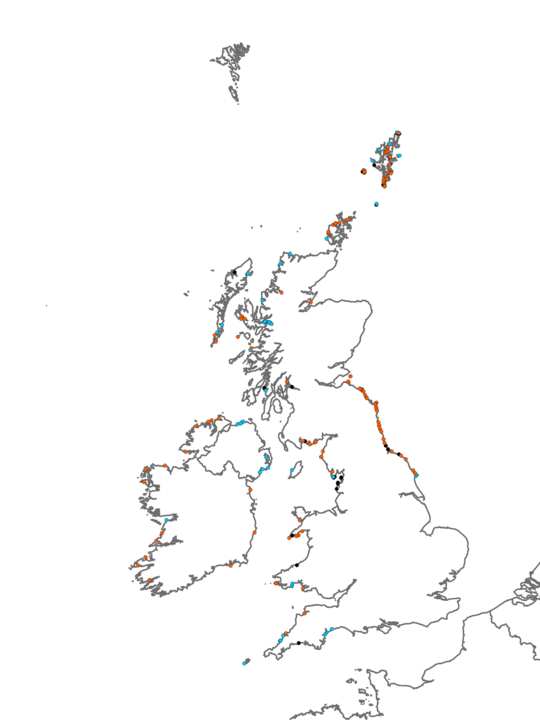 On very exposed to exposed rocky shores the eulittoral zone, particularly the mid and lower shore, is typically characterised by patches of small individuals of the mussel Mytilus edulis interspersed with patches of the barnacle Semibalanus balanoides and individuls of the limpet Patella vulgata. Amongst the mussels small individuals of red seaweeds including Ceramium spp., Corallina officinalis and Mastocarpus stellatus can be found. The foliose red seaweeds Porphyra umbilicalis and Palmaria palmata are commonly found as epiphytes on M. edulis where they can form luxuriant growths. The abundance of the red seaweeds generally increases down the shore and in the lower eulittoral they may form a distinct zone in which mussels or barnacles are scarce (FR, Coff.Coff or Him). Where M. edulis occurs on steep rock, red seaweeds are scarce and restricted to the lower shore. The whelk Nucella lapillus and a few winkles such as Littorina spp. can occur where cracks and crevices provide a refuge in the rock. Fucoids are generally absent, although some non-vesiculate Fucus vesiculosus may occur where the shore slopes more gently. This biotope also occurs on steep moderately exposed shores which experience increased wave energy.

MytB is generally found above a zone of either mixed turf-forming red seaweeds (FR), Himanthalia elongata (Him) or above the sublittoral fringe kelp Alaria esculenta (Ala) zone. Above MytB there may be a Verrucaria maura zone (Ver.Ver), a V. maura and sparse barnacle zone (Ver.B), often with P. umbilicalis or a denser barnacle and limpet zone (Sem; FvesB). In addition, patches of lichen Lichina pygmaea with the barnacle Chthamalus montagui (Cht.Cht) may also occur above this biotope, particularly on southern shores.

Severe winter storms can cause periodic removal of this mussel and barnacle community.

Occurs at same wave exposure, but on more steep faces in the upper eulittoral zone. Chthamalus spp. dominate and the abundance of M. edulis is lower (Occasional). The presence of red seaweeds is more sparse, but the black lichen Verrucaria spp. may be present.

Typically occurs in less wave exposed conditions. The abundance of M. edulis is lower (Occasional) or confined to crevices where they may be dense. Red seaweeds are also scarce.

Occurs on moderately exposed coasts, but otherwise in similar physical conditions. It has a higher species diversity and the wrack Fucus vesiculosus is present (Common).

Occurs on moderately exposed coasts, but otherwise in similar physical conditions. It has a higher species diversity and more red seaweeds are usually present. The wrack Fucus serratus is usually present (Common). 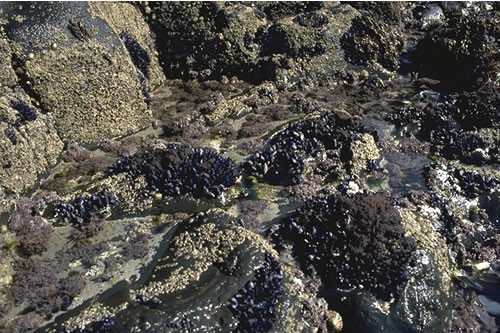 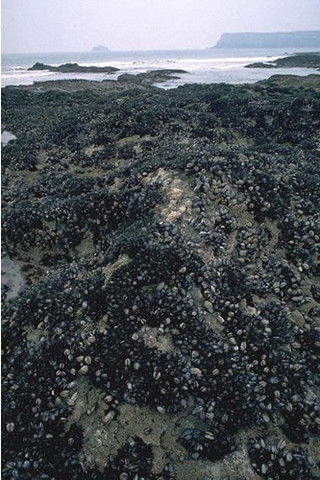 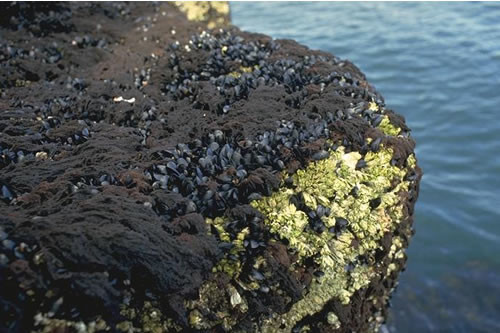