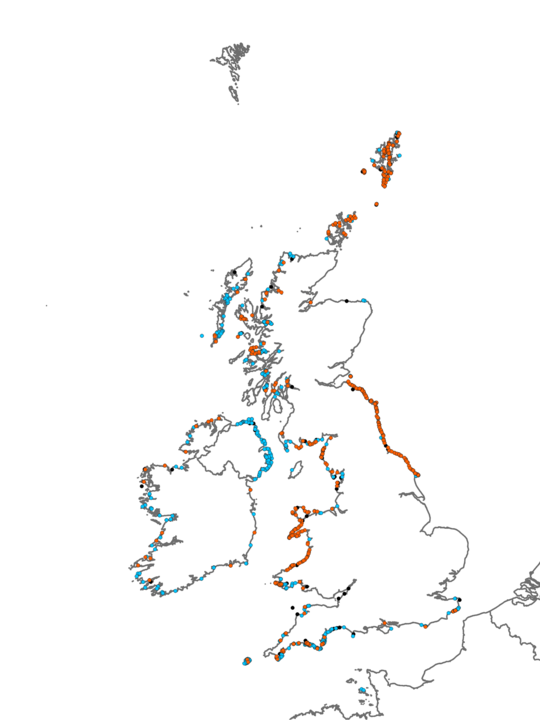 Communities on very exposed to moderately exposed upper and mid eulittoral bedrock and boulders dominated by the mussel Mytilus edulis (MytB), barnacles Chthamalus spp. and/or Semibalanus balanoides and limpets Patella spp. (Cht, Sem). Several variants are identified. Some shores are characterised by dense bands of the barnacle Semibalanus balanoides and the limpet Patella vulgata (Sem). The barnacles may be covered by Porphyra umbilicalis on the upper shore of exposed sites. Cracks and crevices in the rock provide a refuge for small individuals of the mussel M. edulis, winkles Littorina saxatilis and the whelk Nucella lapillus. Red seaweeds also frequently occupy damp crevices, particularly Ceramium shuttleworthianum, Corallina officinalis, Osmundea pinnatifida and encrusting coralline algae, but the non-vesiculate form of the wrack Fucus vesiculosus might be present (Sem.FvesR). Large numbers of the winkle Littorina littorea often dominate fields of large boulders or shores with a more mixed substratum (Sem.LlitX). There is much regional variation affecting the zonation of barnacles in the British Isles. In the north-west C. montagui and/or C. stellatus can form a distinct band above S. balanoides. In the south-west C. montagui and/or C. stellatus can be the dominant barnacles throughout the eulittoral zone (Cht.Cht). On the east coasts S. balanoides is able to extend to the upper shore due to the absence of Chthamalus spp. and thereby any competition. The lichen Lichina pygmaea may be prominent, especially in the south, where it can form distinct patches or even a separate zone among the Chthamalus spp. (Cht.Lpyg). In areas of soft rock (e.g. shales), the barnacles may be scarce or absent and the rock dominated by P. vulgata.

This biotope complex is found in the mid to upper eulittoral on very to moderately exposed shores below the lichen dominated biotopes (Lic) and is typically characterised by patches of mussels M. edulis interspersed with barnacles. Below the MusB biotopes is a community dominated by the wrack Himanthalia elongata and red seaweeds such as C. officinalis, Mastocarpus stellatus and O. pinnatifida (FR). With decreasing wave exposure F. vesiculosus is able to survive, gradually replacing the barnacles and P. vulgata biotope (FvesB). On such moderately exposed shores MusB biotopes may occur on steep and vertical faces, while fucoids dominate the flatter areas (Sem.FvesR, FvesB). 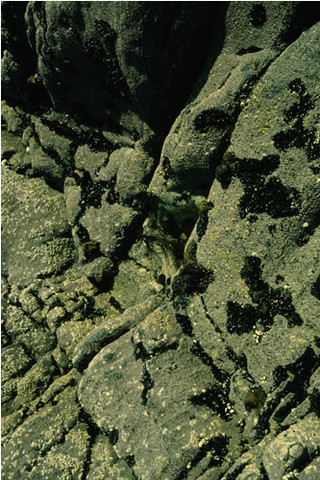