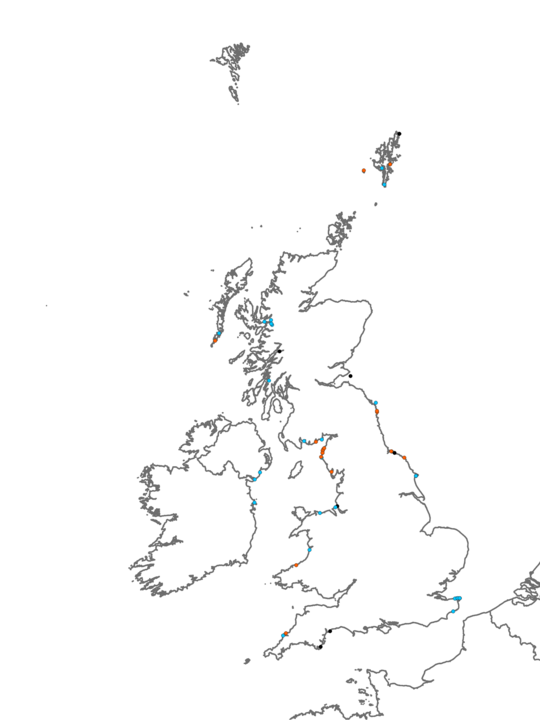 Mid eulittoral exposed to moderately exposed bedrock, often with nearby sediment, covered by a dense band or large patches of the mussel Mytilus edulis. The community often supports scattered Fucus vesiculosus and occasional foliose red seaweeds such as Porphyra umbilicalis, Osmundea pinnatifida, Mastocarpus stellatus, Palmaria palmata or the calcareous algae Corallina officinalis . The ephemeral green seaweeds Enteromorpha intestinalis and Ulva lactuca commonly occur on the shells of the mussels. The barnacle Semibalanus balanoides is common on both the mussel valves and on patches of bare rock, where the limpet Patella vulgata also can be found. The whelk Nucella lapillus and the winkle Littorina littorea can be found within the mussel bed.

Occurs on more exposed shores. Has lower species richness with the notable absence of species such as F. vesiculosus and L. littorea.

Occurs in similar wave exposure but in the lower eulittoral zone. F. serratus dominates and F. vesiculosus is usually absent. Kelp such as Laminaria digitata can be present and usually the abundance of the red seaweeds is higher.

Occurs on mixed substrata, typically in more sheltered conditions. F. vesiculosus can be present at low abundance (Occasional) while L. littorea occurs in higher density. Red seaweeds are scarce and the barnacle Elminius modestus can be present. 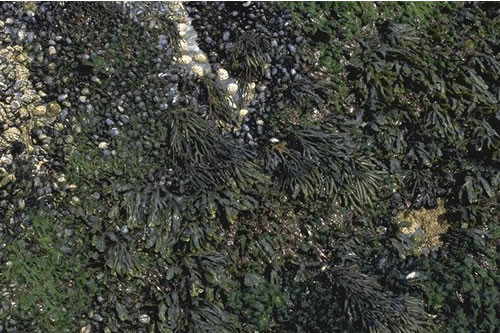