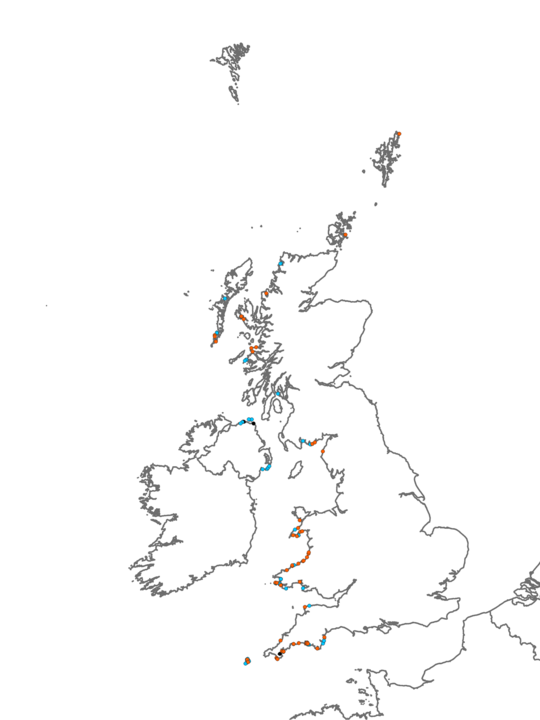 Very exposed to moderately exposed upper and mid eulittoral bedrock and boulders characterised by a dense community of barnacles, including Chthamalus montagui, Chthamalus stellatus and Semibalanus balanoides, and the limpet Patella vulgata. Damp cracks and crevices in the rock provide a refuge for small individuals of the mussel Mytilus edulis, and the winkles Melarhaphe neritoides and Littorina saxatilis. These crevices can also be occupied by encrusting coralline algae and the anemone Actinia equina. Patches of the black lichen Verrucaria maura and the green seaweed Enteromorpha intestinalis may be present, though in low abundance (Occasional). Shaded vertical littoral fringe and upper eulittoral bedrock may be characterised by the shade-tolerant red seaweeds Catenella caespitosa, Bostrychia scorpioides and/or Lomentaria articulata. Where the turf of C. caespitosa is well established, barnacles are rare. Geographical variation: There is much regional variation in the distribution and zonation of Chthamalus spp. On the west coast Chthamalus spp. dominate the upper eulittoral, often forming a distinct white band above a darker band of S. balanoides in the mid eulittoral zone (Sem). C. montagui is better adapted to resist desiccation and, therefore, extends further up the shore. In the south-west Chthamalus spp. can be the dominant barnacles throughout the eulittoral zone.

Cht.Cht is found below the black lichen Verrucaria maura (Ver.B or Ver.Ver) on very exposed shores. It is found above the mussel Mytilus edulis and barnacles biotope (MytB). On slightly less exposed shores the wrack Fucus vesiculosus is able to survive and a mixed barnacle and F. vesiculosus biotope may occur (Sem.FvesR) beneath the Cht. On such moderately exposed shores Cht may still occur on steep and vertical faces, while fucoids dominate the flatter areas (Sem.FvesR or Fves), though these communities should not be confused with Sem.FvesR. Cht can also occur above Sem. On very sheltered sea lochs in Argyll, West Scotland Chthamalus spp. are unusually abundant in the upper eulittoral zone.

Occurs in the littoral fringe above the Cht.Cht biotope. The barnacles C. montagui and S. balanoides and limpets P. vulgata are sparse (all Occasional) while V. maura occurs at a higher abundance (Abundant).

Found especially in the south. Lichina pygmaea forms a distinct band, often with the bivalve Lasaea adasoni embedded in the thalli. The species composition is similar though red and green seaweeds such as Corallinaceae and Enteromorpha spp. are not present.

Occurs in the mid eulittoral zone on slightly less exposed shores. It notably lacks Chthamalus spp. and is dominated by a higher abundance of S. balanoides and the whelk Nucella lapillus. Usually, a sparse flora of seaweeds is present including the wrack Fucus vesiculosus and the green seaweed Enteromorpha spp. 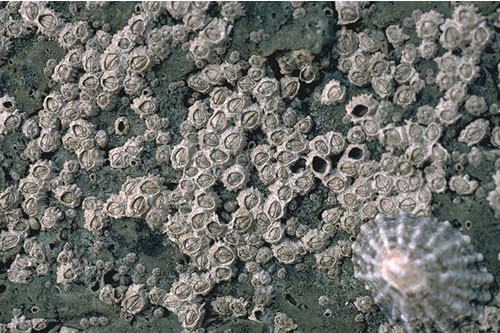 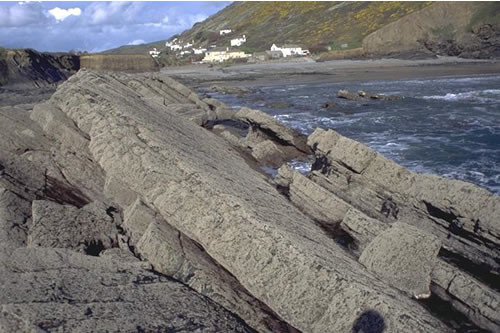