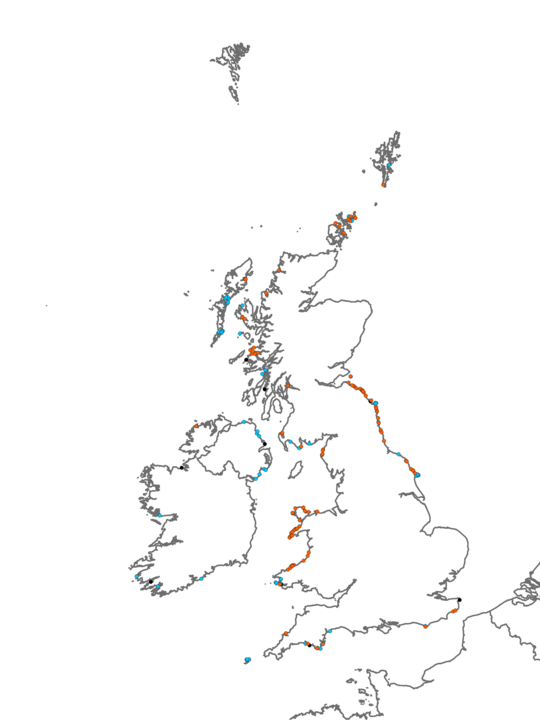 Exposed and moderately exposed upper and mid eulittoral bedrock characterised by the barnacle Semibalanus balanoides, the limpet Patella vulgata and the whelk Nucella lapillus with a sparse community of seaweeds. Turfs of the wrack Fucus vesiculosus can be present on the more horizontal parts of the shore though usually in low abundance (Occasional). Individuals of F. vesiculosus can lack the characteristic twin air bladders due to environmental stress (i.e. wave exposure). A sparse seaweed community consisting of foliose red seaweeds such as Osmundea pinnatifida and Mastocarpus stellatus are usually present along with the Corallina officinalis and the green seaweed Enteromorpha intestinalis. The algal community is usually restricted to fissures and cracks in the bedrock surface. Moist cracks and crevices also provide a refuge for small individuals of the mussel Mytilus edulis and the winkles Littorina saxatilis and Littorina littorea. These crevices can also be occupied by encrusting coralline algae and the anemone Actinia equina.

On some shores, particularly those which are moderately exposed to wave action, temporal fluctuations in the abundance of limpets, barnacles and fucoid seaweeds may occur. As a result, over a number of years, a single shore may cycle between the barnacle-P. vulgata dominated biotope (Sem.FvesR) and a F. vesiculosus-dominated biotope (Fves). Individuals of F. vesiculosus growing in stressed environmental conditions (i.e. high wave exposure) do not always develop the characteristic twin air bladders.

Occurs in the upper eulittoral zone on slightly more exposed shores. It is dominated by the barnacles Chthamalus spp. and has a lower abundance of S. balanoides and N. lapillus. It lacks the sparse flora of seaweeds that are characteristic of Sem.FvesR. 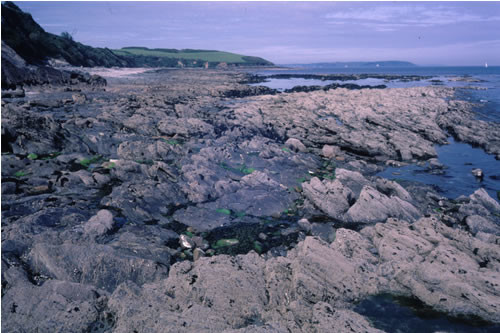 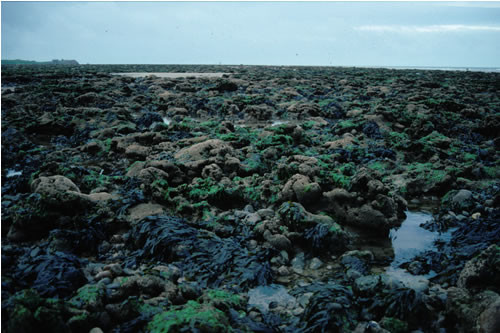