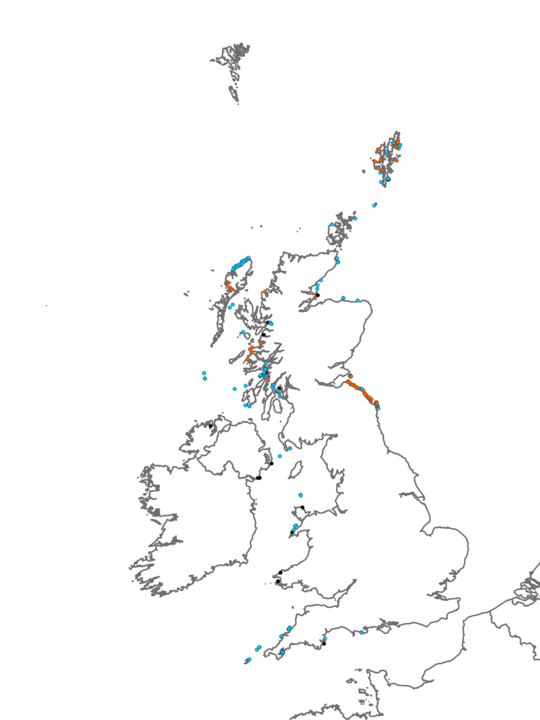 This variant is typically found on the upper faces of exposed and moderately wave-exposed circalittoral bedrock, boulders and cobbles subject to moderately strong to weak tidal streams. It is characterised by high densities of brittlestars (predominantly Ophiothrix fragilis, Ophiocomina nigra and Ophiura albida). In fact, they may form such dense beds that the seabed underneath may not be visible. The rocky substratum is usually colonised by species such as encrusting red algae and the white, calcareous tubes of the polychaete Pomatoceros triqueter. Only robust hydroids such as Abietinaria abietina, Alcyonium digitatum and bryozoan crusts such as Parasmittina trispinosa are able to tolerate the significant smothering effect from the dense mat of brittlestars. Other species typically seen include Echinus esculentus, Asterias rubens, Pagurus bernhardus, Anapagurus hyndmanni, Gibbula cineraria, Urticina felina, Pododesmus patelliformis and Ciona intestinalis.

Shallower than the FaAlCr.Bri variant, kelp park and forest may be found with species such as Laminaria saccharina and Laminaria hyperborea.

This biotope occurs on more wave-sheltered mixed substratum, subject to moderately strong to very weak tidal streams. It tends to have a similar species diversity to FaAlCr.Bri, but robust hydroids such as A. abietina have been replaced by more delicate species such as Kirchenpaueria pinnata. Occasionally, bryozoan crusts may be present in FaAlCr.Bri as well.

This biotope is found on much more exposed bedrock or boulders. A diverse range of species is associated with this biotope including numerous hydroids, bryozoans and echinoderms.