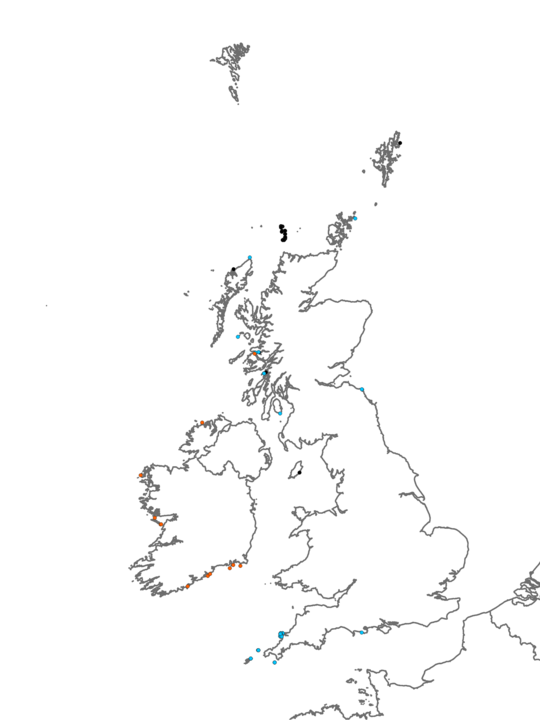 This variant is typically found on the upper faces of wave-exposed circalittoral bedrock or boulders subject to moderately strong to weak tidal streams, on open coasts. However, the depth at which the variant occurs means that wave action is not so severe on the seabed as to displace the dense mat of brittlestars that covers the seabed. Ophiothrix fragilis is usually the most dominant species in shallow water, with Ophiocomina nigra usually found amongst them, but sometimes becoming the dominant species in deeper water. Although brittlestar biotopes are typically species-poor, the underlying fauna in this variant is relatively diverse and resembles that of CarSp.PenPcom. Species such as the anemone Urticina felina, the cup coral Caryophyllia smithii, and the anemone Corynactis viridis may occasionally be present. There may also be sparse clumps of various hydroids including Halecium halecinum, Nemertesia antennina, Nemertesia ramosa, Sertularella gayi and Abietinaria abietina. Soft coral Alcyonium digitatum is occasionally present and there may be sparse specimens of the sponges Cliona celata and Polymastia boletiformis. In addition, various echinoderms such as Asterias rubens, Antedon bifida, Echinus esculentus, Henricia oculata, Marthasterias glacialis and Luidia ciliaris may be observed. The barnacle Balanus crenatus and the polychaete Pomatoceros triqueter may be seen attached to any available space on the bedrock and boulders not smothered by brittlestars. Bryozoan crusts such as Parasmittina trispinosa may also be present.

Wave-exposed seabed composed of bedrock ridges and/or boulder or cobble slope. Shallower than this biotope, the lower infralittoral kelp park is dominated by Laminaria hyperborea. A dense understorey may be present, containing Antedon spp., Phycodrys rubens and Plocamium cartilagineum.

This biotope is found on slightly more wave-sheltered coasts, but subject to similar moderately strong to weak tidal streams. FaAlc.Bri also tends to be fond on a more heterogeneous seabed, whereas CarSp.Bri is typically found on bedrock or boulders. Although they are both brittlestar biotopes, unlike CarSp.Bri, FaAlc.Bri is devoid of any sponges, and is characterised by graze-resistant hydroids.

This biotope is found on sites with greatly reduced wave-exposures and tidal streams, compared to CarSp.Bri. As AmenCio.Bri is found in low-energy sites, it tends to be heavily silted compared to CarSp.Bri. Although both biotopes are dominated by brittlestars, AmenCio.Bri is more grazed and barren, and does not have such as diverse range of bryozoan crusts or hydroids (it does have a diverse range of anemones).