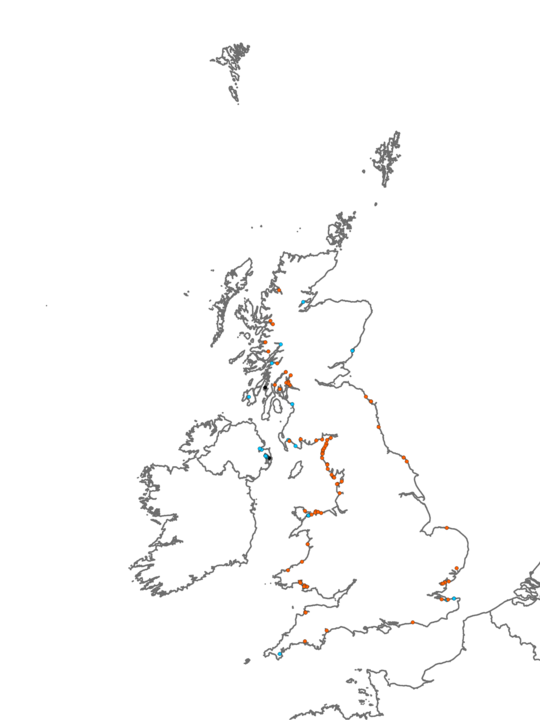 Mid and lower shore mixed substrata (mainly cobbles and pebbles on fine sediments) in a wide range of exposure conditions and with aggregations of the mussel Mytilus edulis colonising mainly the sediment between cobbles, though they can extend onto the cobbles themselves. The mussel aggregations can be very dense and support various age classes. In high densities the mussels bind the substratum and provide a habitat for many infaunal and epifaunal species. The wrack Fucus vesiculosus is often found attached to either the mussels or the cobbles and it can occur at high abundance. The mussels are also usually encrusted with the barnacles Semibalanus balanoides, Elminius modestus or Chtamalus spp., especially in areas of reduced salinity. The winkles Littorina littorea and L. saxatilis and small individuals of the crab Carcinus maenas are common amongst the mussels, whilst areas of sediment may contain the lugworm Arenicola marina, the sand mason Lanice conchilega and other infaunal species. Pools are often found within the mussel beds that support algae such as Chondrus crispus. Where boulders are present they can support the limpet Patella vulgata, the dogwhelk Nucella lapillus and the anemone Actinia equina. Ostrea edulis may occur on the lowest part of the shore. There are few infaunal samples for this biotope, hence the characterising species list below shows only epifauna. Where infaunal samples have been collected for this biotope, they contain a highly diverse range of species including nematodes, Anaitides mucosa, Hediste diversicolor, Polydora spp., Pygospio elegans, Eteone longa, oligochaetes such as Tubificoides spp., Semibalanus balanoides, a range of gammarid amphipods, Corophium volutator, Jaera forsmani, Crangon crangon, Carcinus maenas, Hydrobia ulvae and Macoma balthica.

On more exposed, predominantly rocky shores this biotope can be found below a band of ephemeral green seaweeds (Eph.X). On sheltered, predominantly rocky shores either a F. vesiculosus dominated biotope or a biotope dominated by the wrack Ascophyllum nodosum (Fves.X; Asc.X) can be found above or the barnacle dominated biotope (SEM.LitX). This biotope is also found in lower shore tide-swept areas, such as in the tidal narrows of Scottish sealochs.

Under sheltered conditions, pseudofaeces may build up over time, creating a layer of mud and changing the biotope to Myt.Mu. Where the stability of the mussed bed depends on the mussels being attached to stable cobbles, a build-up of mud from pseudofaeces may prevent this attachment, making the mussel bed unstable and liable to be washed away during storms.

Occurs exclusively on rock, sometimes higher on the shore than Myt. It has a similar species composition, but M. edulis occurs in low abundance (Occasional) while L. saxatilis occurs at an abundance of frequent or above.

Occurs on sand and muddy sand flats where no cobbles and boulders are present. Rocky shore epifauna does not occur, but the sediment infauna is a lot more diverse, characterised by a range of bivalve and polychaete species.

Occurs in sheltered conditions on mudflats. Rocky shore epifauna does not occur. The sediment is anoxic and therefore relatively few infaunal species are present. 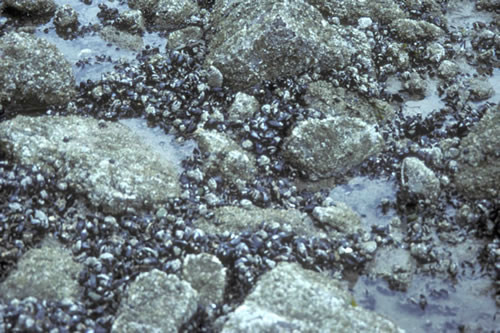 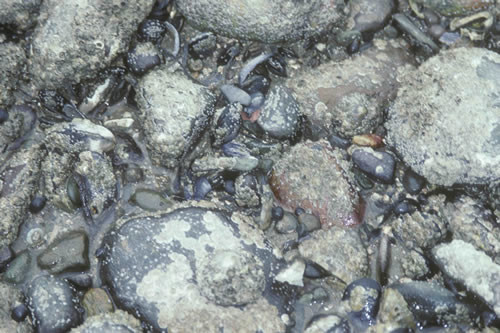