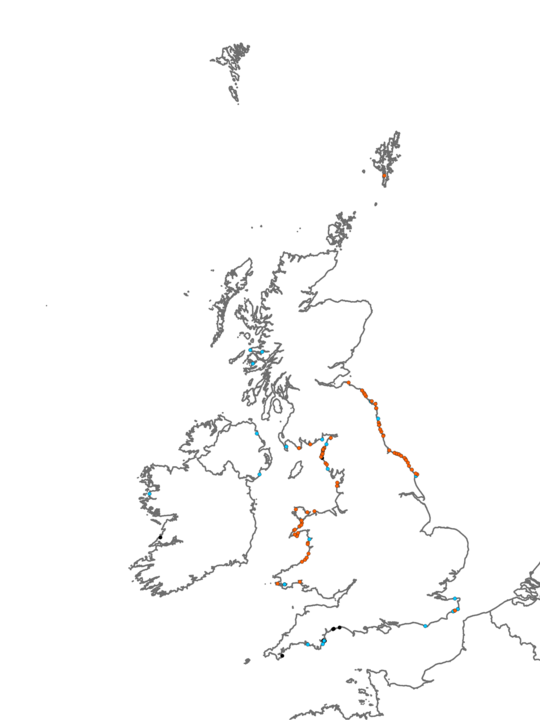 Large patches of boulders, cobbles and pebbles in the eulittoral zone on exposed to moderately exposed shores colonised by the barnacle Semibalanus balanoides and, on larger rocks, the limpet Patella vulgata. The winkles Littorina littorea and Littorina saxatilis and the whelk Nucella lapillus are typically found in high numbers on and around cobbles and smaller boulders, while the anemone Actinia equina occurs in damp areas between and underneath larger boulders. Between the cobbles and pebbles, the mussel Mytilus edulis occasionally occurs, but always at low abundance, as do the crab Carcinus maenas and gammarid amphipods. Ephemeral green seaweeds such as Enteromorpha intestinalis may cover cobbles and boulders. The foliose red seaweeds Chondrus crispus, Mastocarpus stellatus and Osmundea pinnatifida as well as the wrack Fucus vesiculosus may also occur in low abundance on cobbles and boulders. The top shells Gibbula cineraria and Gibbula umbilicalis can, on more sheltered shores, be found among the seaweeds or underneath the boulders. The barnacle Elminius modestus is present on some shores.

On exposed shores with large boulders Sem.LlitX is found below the black lichen Verrucaria maura and sparse barnacles biotope (Ver.Ver or Ver.B) and/or below the Chthamalus spp. and P. vulgata biotope (Cht). Below this biotope the Himanthalia elongata dominated biotopes may occur (Him; Coff). On less exposed shores Sem.LlitX can be found above the Fucus serratus biotope on boulders (Fser.Bo).

Seasonally mobile boulders, cobbles and pebbles are likely to have a sparser coverage of flora and fauna, because the rocks can be subject to turning. Ephemeral green seaweeds can dominate during the summer.

Occurs at a similar wave exposure in the eulittoral zone, but usually on bedrock. Due to the more stable substrata N. lapillus (Frequent) and P. vulgata (Abundant) are found in higher abundance. L. littorea are not present in high abundance (Occasional) and C. maenas are rare.

Occurs at a similar wave exposure in the eulittoral zone, but on bedrock shores. This biotope has a lower species diversity and notably lacks A. equina and L. littorea, while L. saxatilis is common. Seaweeds are also usually rare due to wave scourge.

Occurs on sheltered to extremely sheltered shores with mixed substrata and often with reduced salinity. Large boulders or bedrock are not present. The species diversity and their abundance are impoverished with the notable absence of red seaweeds.