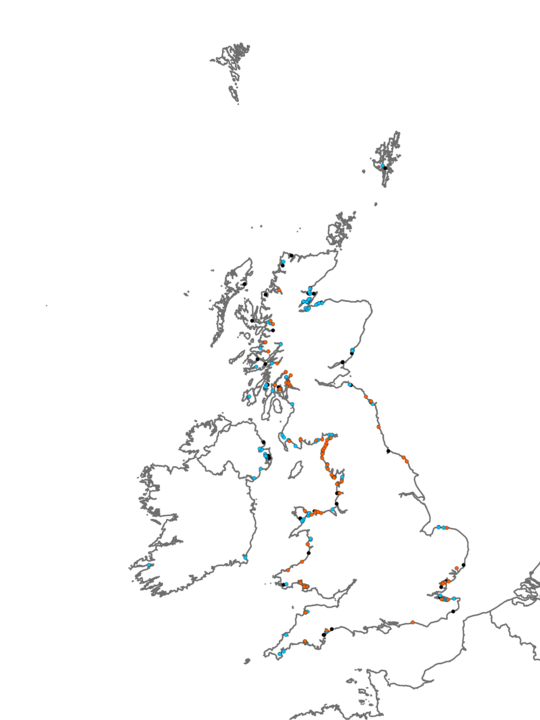 Sediment shores characterised by beds of adult mussels Mytilus edulis occur principally on mid and lower eulittoral mixed substrata (mainly cobbles and pebbles on muddy sediments) in a wide range of exposure conditions. In high densities the mussels bind the substratum and provide a habitat for many infaunal and epifaunal species. This biotope is also found in lower shore tide-swept areas, such as in the tidal narrows of Scottish sealochs. A fauna of dense juvenile mussels may be found in sheltered firths, attached to algae on shores of pebbles, gravel, sand, mud and shell debris with a strandline of fucoid algae.

High densities of juvenile mussels attached to seaweed have been recorded from sheltered shores of the Dornoch Firth and Moray Firth. Adult mussel beds can be found below a band of ephemeral green seaweeds (Eph.X) on more exposed, predominantly rocky shores. On sheltered, predominantly rocky shores either a F. vesiculosus dominated biotope or a biotope dominated by the wrack Ascophyllum nodosum (Fves.X; Asc.X) can be found above or the barnacle dominated biotope (SEM.LitX).

The temporal stability of mussel beds can vary a lot. Some beds are permanent, maintained by recruitment of spat in amongst adults. Other beds are ephemeral, an example of which are beds ocurring at South America Skear where large amounts of spat settle intermittently on a cobble basement. The mussels rapidly build up mud, and are unable to remain attached to the stable cobbles. They are then liable to be washed away during gales. A second example of ephemeral mussel dominated biotopes occurs when mussel spat ("mussel crumble") settles on the superficial shell of cockle beds, such as is known to occur in the Burry Inlet.