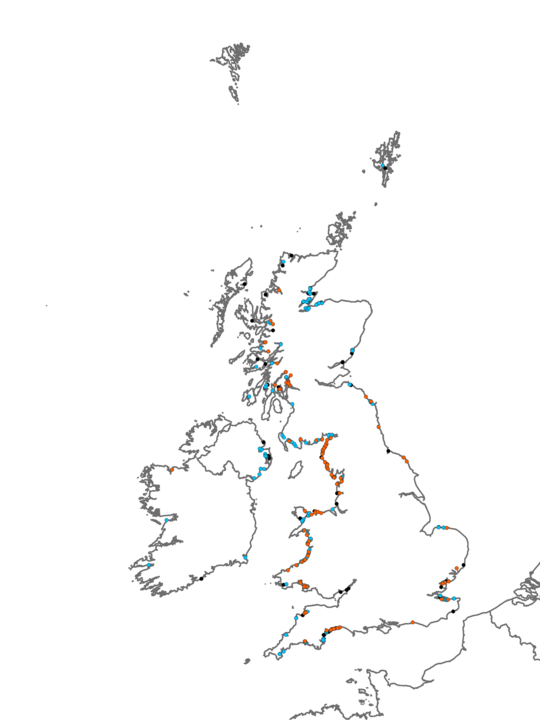 The Littoral Biogenic Reefs habitat complex contains two biotope complexes (littoral Sabellaria reefs, and mixed sediment shores with mussels), encompassing the littoral biotope dominated by the honeycomb worm Sabellaria alveolata, and littoral Mytilus edulis- dominated communities. S. alveolata can form honeycomb reefs on mid to lower shore on exposed coasts, where there is a plentiful supply of sediment. The underlying substratum may consist primarily of rock or stable cobbles and boulders, or of cobbles and boulders on sand. Mixed sediment shores characterised by beds of adult mussels Mytilus edulis occur principally on mid and lower eulittoral mixed substrata (mainly cobbles and pebbles on muddy sediments) in a wide range of exposure conditions. In high densities the mussels bind the substratum and provide a habitat for many infaunal and epifaunal species.

Where S. alveolata reefs occur on underlying substratum that is primarily rocky, biotopes dominated by ephemeral seaweeds, such as Enteromorpha spp. and Porphyra spp. or the perennial wrack Fucus vesiculosus on mixed substrata (FvesB; Fves.X; EphX; EntPor) may occur higher on the shore. Rockpool biotopes dominated by the red seaweed Corallina officinalis (Cor), by wracks such as Fucus spp. or by kelp such as Laminaria spp. (FK) may also be found above this biotope. Lower down, a community consisting of mixed scour-tolerant species like the kelp Laminaria digitata and opportunistic foliose red seaweeds such as Polyides rotundus and Ahnfeltia plicata (Ldig.Ldig; XKScrR; EphR; PolAhn) can occur. In adjacent sediment areas Lanice conchilega may dominante (Lan). Like S. alveolata reefs, adult mussel beds can found below a band of ephemeral green seaweeds (Eph.X) on more exposed, predominantly rocky shores. On sheltered, predominantly rocky shores either a F. vesiculosus dominated biotope or a biotope dominated by the wrack Ascophyllum nodosum (Fves.X; Asc.X) can be found above, or the barnacle dominated biotope (Sem.LitX).

S. alveolata reefs may be susceptible to storm damage in the winter, although they can regenerate remarkably quickly in a season as long as some adults are left as they facilitate the larval settlement. S. alveolata is tolerant to burial under sand for several weeks. Changes in desiccation over a period of time can cause part of the population to die. One of the mussel-dominated sub-biotopes, Myt.Sa, could change to Myt.Mu over time as pseudofaeces build up forming a layer of mud. This cannot happen where wave action or tidal streams wash away pseudofaeces and prevent a build up. In areas where mussel spat ("mussel crumble") settles on the surface shell layer of cockle beds, the mussel cover may be ephemeral.