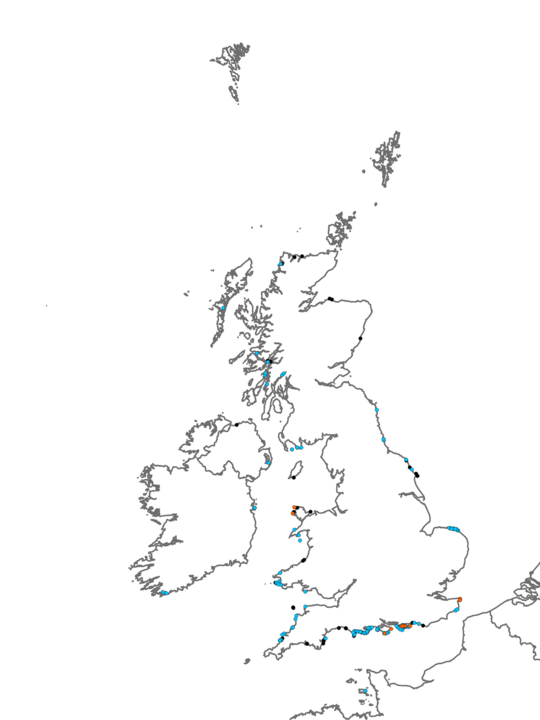 Upward-facing surfaces of shallow, infralittoral bedrock and boulders in areas of turbid water dominated by dense red seaweeds, with the notable absence of kelp. The stable rock, which can be cobbles or boulders but is more typically bedrock, is usually silted. Individual species of foliose red seaweeds such as Plocamium cartilagineum or Calliblepharis ciliata often dominate. Other red seaweeds likely to be present include Phyllophora crispa, Rhodymenia holmesii, Halurus flosculosus, Cryptopleura ramosa, Hypoglossum hypoglossoides, Heterosiphonia plumosa and coralline crusts. The brown seaweed Dictyota dichotoma is sometimes present, although never abundant. This biotope does not generally occur below kelp park but rather occurs on shallow, silted rock on which kelp would normally grow in less turbid conditions. The fauna can be variable but is generally typified by the presence of silt-tolerant animals such as encrusting sponges, particularly Dysidea fragilis and Halichondria panicea, the hydroid Tubularia indivisa, bryozoan crusts and scattered Sabellaria spinulosa and Balanus crenatus. In the summer months the seaweeds can become heavily encrusted with the bryozoan Electra pilosa and the ascidian Molgula manhattensis which can also form dense mats on the rock. The polychaete Lanice conchilega can be present, where sandy and muddy patches occur. Where this biotope occurs on chalk bedrock, such as off the Sussex coast, the piddock Pholas dactylus is often found bored into the rock. This biotope is recorded from the English Channel, off Kent, Sussex and the Isle of Wight. Please notice that individual sites of this biotope can vary significantly in the species composition.

This biotope generally occurs on discrete bedrock outcrops surrounded by areas of mixed sediment or mobile sand. Off Sussex, it occurs on the horizontal chalk bedrock forming the tops of cliffs (2-3m in height).

The seaweeds die back in late autumn and summer leaving, silted, coralline-encrusted rock with a sparse fauna of sponges, S. spinulosa and occasional hydroids and bryozoans. The bryozoan Amathia lendigera can also become abundant amongst the seaweeds during the summer months.

This biotope occurs in deeper water below the kelp park with a higher diversity of sponges like H. panicea and D. fragilis.

This biotope occurs in deeper water below the kelp park with a high abundance of the brown seaweeds Dictyopteris membranacea (Frequent) and D. dichotoma (Common). It also has a higher diversity of sponges like H. panicea and D. fragilis.