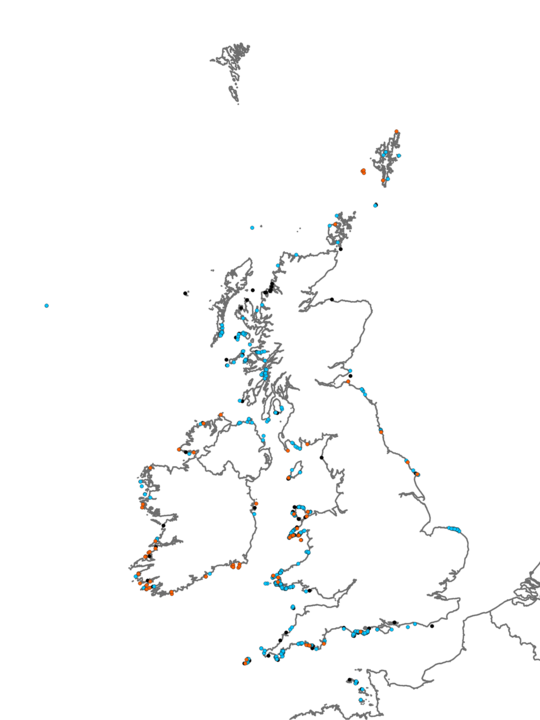 A dense turf of foliose red seaweeds on exposed or moderately exposed lower infralittoral rock, generally, at or below the lower limit of the kelp. Most of the red seaweeds are common to the kelp zone above, while the faunal component of the biotope is made up of species that are found either in the kelp zone or the animal-dominated upper circalittoral below. Foliose species commonly present include Dilsea carnosa, Hypoglossum hypoglossoides, Schottera nicaeensis, Cryptopleura ramosa and Delesseria sanguinea. The red seaweed species composition varies considerably; at some sites a single species may dominate (particularly Plocamium cartilagineum). Small filamentous red seaweeds can be found here as well. These include species such as Heterosiphonia plumosa, Brongniartella byssoides. As well as a varied red seaweed component, this biotope may also contain occasional kelp plants and patches of the brown foliose seaweed Dictyota dichotoma. Coralline crusts covers the bedrock beneath the seaweeds. The fauna generally comprises low-encrusting forms such as the tubeworms Pomatoceros spp., anthozoans including Alcyonium digitatum, Urticina felina and Caryophyllia smithii) and occasional sponge crusts such as Cliona celata, Esperiopsis fucorum, Scypha ciliata and Dysidea fragilis. More mobile fauna include the gastropod Calliostoma zizyphinum, the echinoderms Echinus esculentus as well as the starfish Asterias rubens and Marthasterias glacialis and lastly, the crab Cancer pagurus. Bryozoan crusts such as Electra pilosa can be found fronds on the foliose red seaweeds while scattered hydroids such as Nemertesia antennina form colonies on shells, cobbles and available rock. At some sites erect bryozoans Crisia spp. and Bugula spp. are present. Ascidians such as Clavelina lepadiformis and Clavelina lepadiformis may also be common. In the north the foliose red seaweed Callophyllis laciniata may occur.

This biotope is generally found at or below the lower limit of the kelp, below either kelp forest or park (LhypR.Ft and LhypR.Pk).

Many of the red seaweeds, which occur in this biotope, have annual fronds, which tend to die back in the autumn and regenerate again in the spring. This produces a seasonal change in the density of the seaweed cover, which is substantially reduced over winter months and reaches its most dense between April to September.

This biotope occurs in similar depth and conditions as FoR but is confined to SW coasts. The abundance of the brown seaweeds Dictyopteris membranacea (Frequent) and D. dichotoma is higher (Common) with the Occasional presence of the kelps Laminaria hyperborea and Laminaria saccharina.

This biotope occurs on shallow, silted infralittoral bedrock and boulders in areas of turbid water dominated by dense red seaweeds, with the notable absence of kelp. Individual species of red seaweeds such as Plocamium cartilagineum or Calliblepharis ciliata often dominate. The fauna is both less diverse and has a lower abundance. 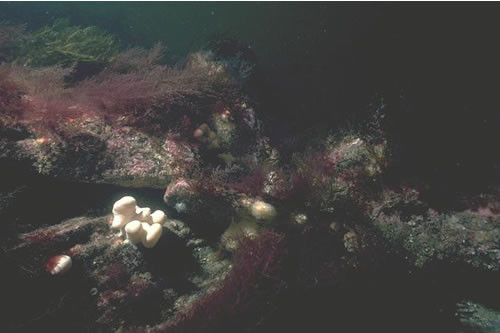 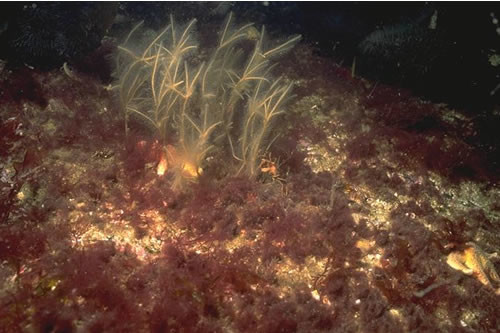