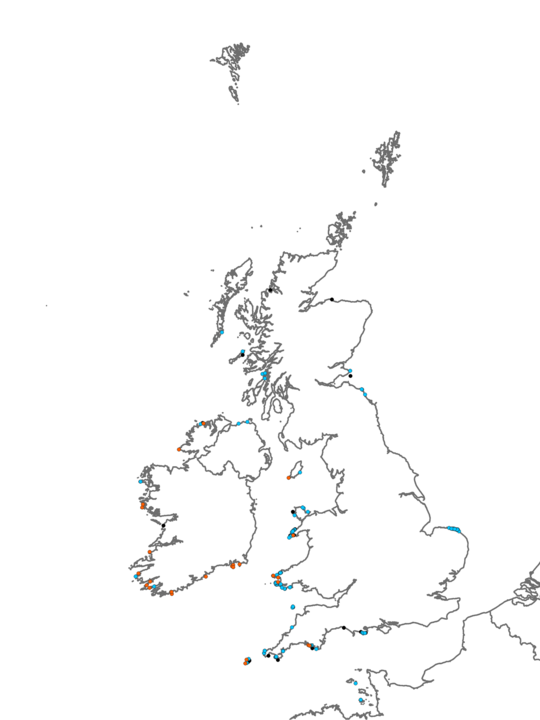 A dense turf of foliose red seaweeds mixed with a dense turf of the foliose brown seaweeds Dictyota dichotoma and/or Dictyopteris membranacea on exposed and moderately exposed lower infralittoral rock, generally at or below the lower limit of the kelp zone. In some areas the lower infralittoral is subject to a moderate amount of scour from nearby sand. D. dichotoma is relatively tolerant of such scour and in such areas a zone forms with other sand-tolerant seaweeds. D. membranacea is confined to south-western coasts. Typically brown seaweeds dominate the seabed or are at least in equal abundance to the red seaweeds, some of which may also form dense stands such as Plocamium cartilagineum, Calliblepharis ciliata, Cryptopleura ramosa, Bonnemaisonia asparagoides, Heterosiphonia plumosa, Delesseria sanguinea and Brongniartella byssoides. The urchin Echinus esculentus can be found grazing the rock surface which can be covered in coralline algae. The anthozoans Caryophyllia smithii and Alcyonium digitatum are usually present in this biotope along with the tube-building worm Pomatoceros sp. which is more common in sand-scoured areas. The starfish Asterias rubens and Henricia sp. and sponge crusts including Cliona celata can also be found here. D. dichotoma also occurs in the kelp park, and records should only be assigned to this biotope where kelp such as Laminaria hyperborea is sparse or absent and a relatively high density of D. dichotoma and/or D. membranacea is present.

Like many of the red seaweeds found in this biotope the dominant brown seaweeds D. membranacea and D. dichotoma have annual fronds which tend to die back in the autumn and regenerate again in the spring. This produces a seasonal change in the density of the seaweed cover, which is substantially reduced over winter months and reaches its most dense between April and September.

This biotope occurs at similar depth and conditions as FoR.Dic. The abundance of the brown seaweeds Dictyopteris membranacea (Occasional) and D. dichotoma is higher (Frequent) without the presence of the kelps Laminaria hyperborea and Laminaria saccharina.

This biotope occurs on shallow, silted infralittoral bedrock and boulders in areas of turbid water dominated by dense red seaweeds, with the notable absence of kelp. Individual species of red seaweeds such as Plocamium cartilagineum or Calliblepharis ciliata often dominate. The fauna is both less diverse and at lower abundance.