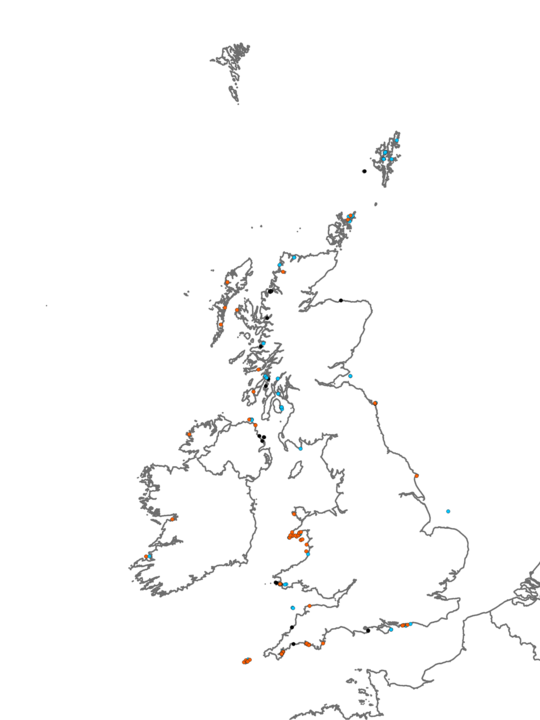 Shallow mixed substrata of cobbles and pebbles swept by moderately strong tidal streams in exposed areas, and characterised by dense stands of red seaweeds. Tide-swept infralittoral cobbles and pebbles which may be highly mobile, create an environment that is difficult for many algae to survive in. Foliose and filamentous seaweeds with an encrusting phase in their life history, or those that are able to withstand rolling of the substratum and scouring, can form dense turfs of seaweed in the more settled summer months. Characteristic red seaweeds include Halarachnion ligulatum which is able to survive attached to the pebbles and cobbles. Ephemeral algae grow rapidly in periods of relative stability. Other characteristic red seaweeds include Plocamium cartilagineum, Hypoglossum hypoglossoides, Bonnemaisonia asparagoides and Brongniartella byssoides. Coralline encrusting algae cover many of the cobbles and pebbles; some areas of cobbles may be quite barren, dominated only by encrusting coralline algae and brittlestars. Of the brown seaweeds scattered Laminaria spp. and Desmarestia spp. may be present on more stable large boulders or bedrock outcrops. Chorda filum and Halidrys siliquosa may be present in low abundance but where these seaweeds occur in greater abundance (typically >Frequent) refer to MIR.LsacChoR and MIR.HalXK respectively. Although the faunal component of this biotope is usually relatively sparse it can include a wide variety of species. Turfs of hydroids (Nemertesia spp., Aglaophenia tubulifera) and bryozoans (Crisia spp. and Bugula spp.) are the major components but sponges and anemones may also occur. Brittlestars, sea-urchins, hydroids and solitary ascidians are more prominent in the Scottish examples of this biotope, which tend to occur in deeper water, due in part to clearer waters.

Although not common, this biotope is widely distributed from Sussex to the shallow areas of the Sarns in Cardigan Bay, the west coast of Scotland and the north-east coast of Ireland. Despite the wide distribution, the red seaweed composition remains remarkably constant. In areas such as the Sarns, in Wales, where mixed substrata continue into the shallows, dense swathes of HIR.LsacChoR can be found. More stable but highly scoured areas adjacent to LsacR.CbPb can support the Halidrys biotope HIR.XKHal. Where bedrock or large boulders occur above the mixed substrata of LsacR.CbPb it may support a kelp forest or park (HIR.LhypR or MIR.Lhyp). At many sites the mixed substrata supporting the dense seaweed turf gives way to sediment of varying composition.

This biotope will take on a much more depauperate appearance during the winter months, once the ephemeral seaweeds have died back in late summer/autumn. Storms can mobilise the loose pebbles and cobbles, removing all but the most resilient of seaweeds and animals. By summer, under more stable conditions, new growth will flourish and dense stands of seaweeds dominate the seabed.

LsacR.Gv has a more dense covering of L. saccharina with less robust and some foliose red algal species present.