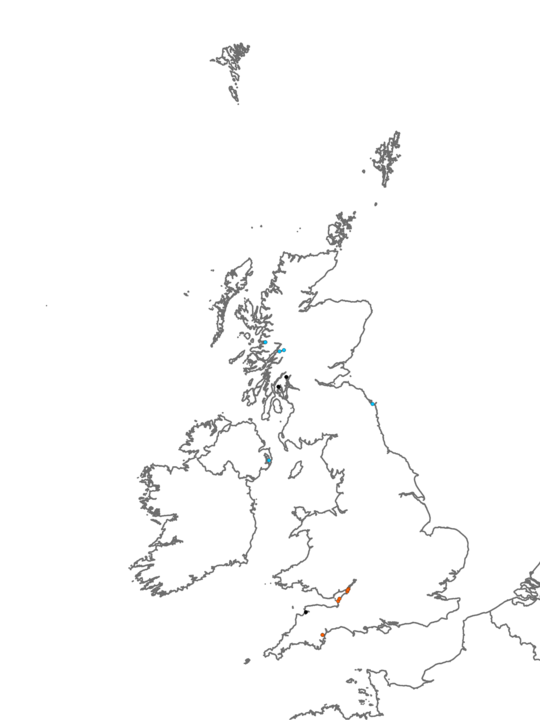 Sheltered gravelly mud shores, subject to reduced salinity. The infaunal community consists of the ragworm Hediste diversicolor, as well as the spire shell Hydrobia ulvae and the baltic tellin Macoma balthica. The presence of the gravel in the sediment is unlikely to have a large influence on the infaunal composition, which is driven mainly by the estuarine sandy mud conditions. Coarse material on the sediment surface may however enrich the biota with additional epifaunal species such as barnacles and algae. Given the low sample numbers for this biotope, more records are needed to confirm the characterising species list.

It is probable that there are broad transition areas between this biotope, and the corresponding muddy sediment biotope HedMac. The boundaries may be very indistinct, with HedMx.Mac present in patches of gravelly mud on areas of mudflat, where the main biotope is HedMac. This biotope has been found alongside its mud equivalent in the Stour estuary.

Occurs in lower estuarine muds and sandy muds, without a gravel fraction. The infauna is dominated by the same species, but is more diverse (though that may be an artefact of greater number of samples in the HedMac biotope).

Occurs in gravelly sandy mud lower down on the shore, under more sheltered conditions. The polychaete infauna is much more diverse, and a range of oligochaete species are found. M. balthica is rare.

Occurs higher up on the shore under more sheltered conditions. The infaunal assemblage is more diverse, with a greater range of polychaetes and bivalves. Scrobicularia plana is abundant, though M. balthica is only occasionally present.

Occurs in slightly more sheltered gravelly sandy mud. The principal differences in the infaunal assemblage are the greater diversity of polychaete species, particularly Tharyx killariensis, the abundance of oligochaetes, and the comparative rarity of molluscs.

Occurs in more sheltered gravelly sandy mud. The principal differences in the infaunal assemblage are the abundance of oligochaetes and Corophium volutator, and the low frequency of occurrence of molluscs.