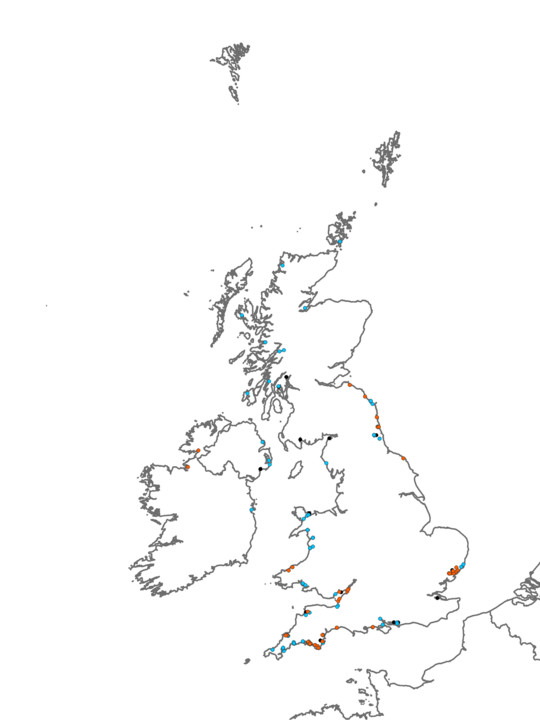 Sheltered gravelly sandy mud, subject to reduced salinity, mainly on the mid and lower shore. The infaunal community is dominated by abundant ragworms Hediste diversicolor. Other species of the infauna vary for the sub-biotopes described. They include polychaetes such as Pygospio elegans, Streblospio shrubsolii, and Manayunkia aestuarina, oligochaetes such as Heterochaeta costata and Tubificoides spp., the mud shrimp Corophium volutator, the spire shell Hydrobia ulvae, the baltic tellin Macoma balthica and the peppery furrow shell Scrobicularia plana. Sub-biotopes described in HedMx have equivalent communities in soft muddy sediments, but the sediment here is much firmer due to the gravel component. There are relatively few records in each sub-type, leading to uncertainty over the precise nature of the habitat, particularly regarding sediment type and salinity regime.

It is probable that there are broad transition areas between the sub-biotopes of HedMx, and the corresponding muddy sediment biotopes. The boundaries may be very indistinct, with the HedMx groups present in patches of gravelly mud on areas of mudflat where the main biotopes are their corresponding mud or sandy mud biotopes. Given the small number of records for each of the sub-biotopes, their spatial distribution is still uncertain.

Occurs in lower estuarine muds and sandy muds, without a gravel fraction. The infauna is more diverse, particularly containing a greater number of bivalves (though that may be an artefact of greater number of samples in the HedMac biotope).

Occurs in estuarine muds, without a gravel fraction. The infauna is dominated by similar species.

Occurs in estuarine muds, without a gravel fraction. The infauna consists virtually entirely of H. diversicolor and C. volutator.