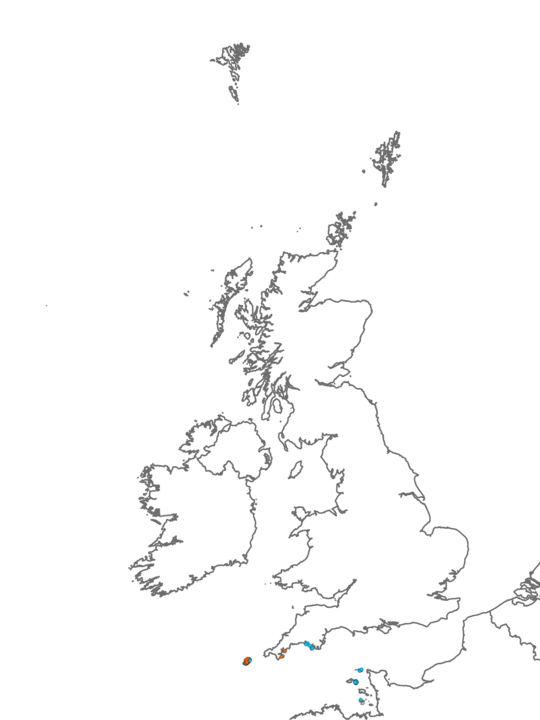 Mixed Laminaria hyperborea and Laminaria ochroleuca forests on upper infralittoral exposed rock with a dense community of foliose red seaweeds such as Cryptopleura ramosa, and Plocamium cartilagineum as well as small filamentous red seaweeds including Bonnemaisonia asparagoides, Heterosiphonia plumosa, Pterosiphonia parasitica and Brongniartella byssoides. L. hyperborea has a rough stipe which allow dense assemblages of epiphytic red seaweeds to form including the foliose Callophyllis laciniata, Delesseria sanguinea and Hypoglossum hypoglossoides. Unlike L. hyperborea, however, L. ochroleuca has a smooth stipe and so it lacks dense assemblages of epiphytic seaweeds L. ochroleuca has a smooth stipe. Encrusting coralline algae often cover much of the rock surface along with a few brown seaweeds including Dictyota dichotoma, Dictyopteris polypodioides and Desmarestia aculeata present as well. In mixed kelp forest L. ochroleuca may predominate with L. hyperborea more common at shallower depths. Whilst foliose red seaweeds dominate the upward-facing rock beneath the kelp canopy, much of the fauna is restricted to crevices or vertical faces, possibly due to grazing pressure. Echinoderms are often common in this biotope, in particular the sea urchin Echinus esculentus and the starfish Asterias rubens and Marthasterias glacialis. Verticals are colonised by anthozoans including the anthozoans Corynactis viridis, Caryophyllia smithii, Actinothoe sphyrodeta and Alcyonium digitatum, while the bryozoan Membranipora membranacea colonise the Laminaria sp. fronds. This biotope is restricted to the coast of Cornwall and the Isles of Scilly. L. ochroleuca occurs at low abundance in other kelp biotopes (sheltered through to exposed) from Dorset to Lundy Island. In such cases, records should be treated as regional variations of these biotopes. Records should only be assigned to the LhypR.Loch biotope when the canopy is dominated by L. ochroleuca alone, or (more usually) by a mixture of both L. hyperborea and L. ochroleuca (at similar abundance). Both this biotope and Lhyp.Loch are common on the Brittany and Normandy coasts.

Since L. ochroleuca is less tolerant of wave action than L. hyperborea this biotope commonly occurs below exposed kelp forests (LhypR.Ft). On occasion it is found below Alaria esculenta in the sublittoral fringe (Ala.Myt or Ala.Ldig). At some sites a band of dense foliose seaweeds, with no kelp, occurs below the kelp forest (FoR or For.Dic) whilst at other sites L. hyperborea kelp park occurs below (LhypR.Pk).

Occur at a similar wave exposure. Superficially, this widespread L. hyperborea biotope looks similar to the L. ochroleuca forest (LhypR.Loch), containing a similar suite of dense foliose red seaweeds such as Phycodrys rubens, Plocamium cartilagineum, Callophyllis laciniata and Delesseria sanguinea beneath the kelp canopy. L. ochroleuca is only present at low abundance, if present at all.

Occur on sheltered to moderately exposed shores. L. hyperborea is less abundant (Occasional) due to the lower wave exposure and Laminaria saccharina is usually present (Frequent).