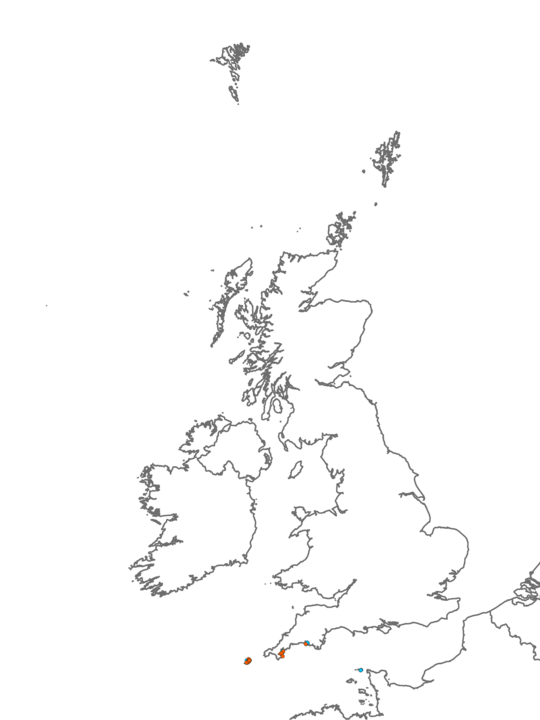 Mixed Laminaria hyperborea and Laminaria ochroleuca forest on upper infralittoral moderately exposed or sheltered rock is restricted to the coast of Cornwall and the Isles of Scilly. Unlike L. hyperborea, however, L. ochroleuca has a smooth stipe and it lacks the epiphytic growth of seaweeds. The bryozoan Membranipora membranacea may encrust the very lower part of the stipe but the rest of the stipe is characteristically bare. The fronds too are generally free of encrusting hydroids, bryozoans and grazing gastropods as compared to L. hyperborea. L. ochroleuca holdfasts, however, are often encrusted with sponges and colonial ascidians. A large variety of foliose and filamentous red seaweeds are often present underneath the canopy. These include Callophyllis laciniata, Plocamium cartilagineum, Cryptopleura ramosa, Delesseria sanguinea, Dilsea carnosa Bonnemaisonia asparagoides, Erythroglossum laciniatum, Sphaerococcus coronopifolius, Polyneura bonnemaisonii and Corallina officinalis. The foliose brown seaweed Dictyota dichotoma is frequently found in this biotope along with the occasional kelp such as Saccorhiza polyschides and Laminaria saccharina. The faunal composition of the biotope as a whole is often sparse. The anthozoans Corynactis viridis and Caryophyllia smithii are common on vertical surfaces with scattered bryozoan turf species such as Crisiidae. Grazers such as the gastropod Gibbula cineraria and the urchin Echinus esculentus are often present. L. ochroleuca occurs across a wide range of wave exposures (in common with L. hyperborea) and consequently it occurs at low abundance in other kelp biotopes (sheltered through to exposed) that occur in the South-West between Dorset to Lundy. In such cases, records should be considered as regional variations of the usual kelp biotopes. Records should only be assigned to this biotope when the canopy is dominated by L. ochroleuca alone, or by a mixture of both L. hyperborea and L. ochroleuca (though the latter is usually at greater abundance). L. ochroleuca commonly occurs on the Brittany and Normandy coasts.

On moderately exposed to sheltered rock Laminaria ochroleuca can form a dense forest below the L. hyperborea forest (Lhyp.Ft). At other sites L. hyperborea park (Lhyp.Pk) occurs below Lhyp.Loch. A band of dense foliose seaweeds can also dominate the lower infralittoral zone below the kelp zone (FoR or FoR.Dic). More data is required to establish further trends in neighbouring biotopes.

The under-storey of foliose and filamentous seaweeds will diminish towards the autumn and regrow in the spring. Otherwise, this biotope is not known to change significantly over time.

This biotope is similar to the mixed L. hyperborea and L. ochroleuca biotope found on exposed coasts (LhypR.Loch), though the latter generally occurs in slightly deeper water (often below the L. hyperborea-forest LhypR.Ft) as L. ochroleuca is less tolerant of strong wave action at its northern limit of distribution.

Superficially, the L. ochroleuca biotope looks similar to a moderately exposed L. hyperborea forest, containing a similar suite of foliose and filamentous red seaweeds beneath the canopy. L. ochroleuca is not usually present in this biotope.