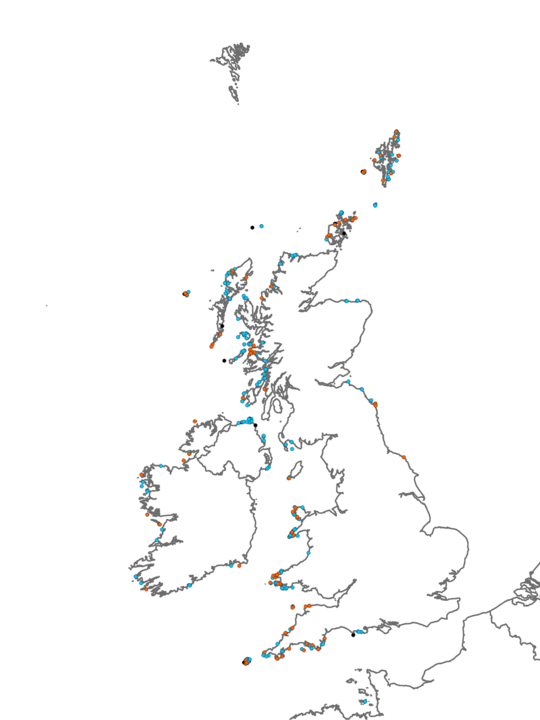 Very exposed to exposed upper infralittoral bedrock or large boulders characterised by a dense forest of the kelp Laminaria hyperborea. On the rock surface beneath the kelp canopy is a dense turf of red foliose seaweeds including Cryptopleura ramosa, Plocamium cartilagineum, Phycodrys rubens and Callophyllis laciniata as well as encrusting coralline algae and the foliose brown seaweed Dictyota dichotoma. The red algal turf can be virtually mono-specific, dominated by stands of P. cartilagineum, C. ramosa or Heterosiphonia plumosa, Kallymenia reniformis or in the north, Odonthalia dentata. Other sites may contain a dense mixed turf of these and other species. The dense turf is due, in part, to the relatively low grazing pressure from the urchin Echinus esculentus in such shallow exposed conditions. The shallowest kelp plants are often short or stunted, while deeper plants are taller and the stipes are heavily epiphytised by red seaweeds such as Delesseria sanguinea and Membranoptera alata. The bryozoan Electra pilosa can form colonies on the foliose red seaweeds, while the bryozoan Membranipora membranacea more often can be found on the L. hyperborea fronds along with the ascidian Botryllus schlosseri and the hydroid Obelia geniculata. The gastropods Gibbula cineraria and Calliostoma zizyphinum are found grazing among the kelp holdfasts, while a few individuals of the barnacle Balanus crenatus can present along with the white calcareous tubes of the polychaete Pomatoceros triqueter, where substratum is available. The starfish Asterias rubens can be found predating on polychaetes, mussels and small crustaceans. The soft coral Alcyonium digitatum can be present covering the rock surface as well as the anthozoan Urticina felina.

This kelp forest biotope most commonly occurs beneath a zone of Alaria esculenta/Mytilus edulis (Ala.Myt) and above a L. hyperborea park (LhypR.Pk). At very exposed sites, such as some areas of Shetland and St Kilda, the lower infralittoral zone is often characterised by a park of Laminaria saccharina and/or Saccorhiza polyschides (LsacSac). This zone presumably develops due to the mobility of nearby cobbles, boulders and sediment during winter storms, removing the slower growing L. hyperborea. Occasionally, a band of dense foliose seaweeds, with no kelp, occurs below the kelp forest (FoR or FoR.Dic).