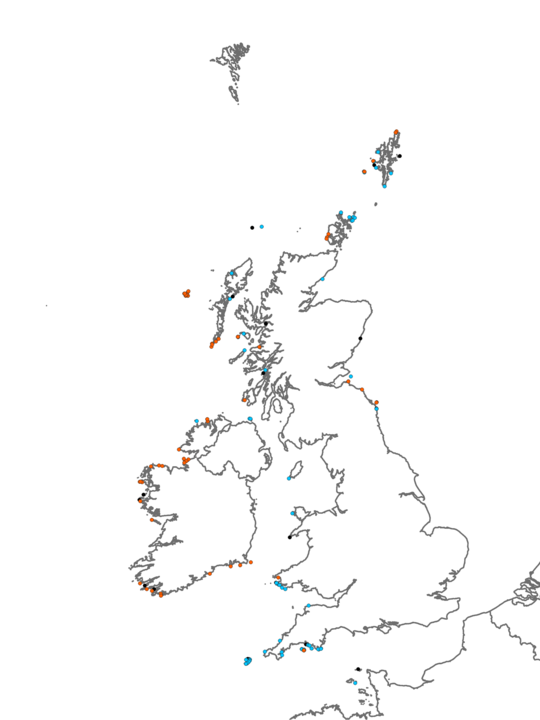 Very exposed and exposed, but wave-surged, upper infralittoral bedrock and massive boulders characterised by a dense forest of the kelp Laminaria hyperborea with a high diversity of seaweeds and invertebrates. The shallowest kelp plants are often short or stunted, while deeper plants are taller with heavily epiphytised stipes with foliose red seaweeds such as Delesseria sanguinea, Cryptopleura ramosa or Plocamium cartilagineum or even the brown seaweed Dictyota dichotoma. Also found on the stipes or on the rock below the canopy are red seaweeds including Phycodrys rubens, Kallymenia reniformis, Callophyllis laciniata, Caryophyllia smithii, and Corallina officinalis, while encrusting coralline algae can cover any bare patches of rock. At some sites the red seaweeds can be virtually mono-specific, while at other sites show considerable variation containing a dense mixed turf of a large variety of species. The red seaweed Odonthalia dentata can be present in the north. The faunal and floral under-storey is generally rich in species due, in part, to the relatively low urchin-grazing pressure in such shallow exposed conditions. The faunal composition of this biotope varies markedly between sites, but commonly occurring are the soft coral Alcyonium digitatum and the anthozoans Sagartia elegans and Corynactis viridis. Sponges form a prominent part of the community with variable amounts of the sponges Halichondria panicea and Pachymatisma johnstonia and several other species. The crab Cancer pagurus and the starfish Asterias rubens are normally present in small numbers foraging beneath the canopy, while the sea urchins Echinus esculentus and Urticina felina graze on the seaweeds. The hydroid Obelia geniculata, the ascidian Botryllus schlosseri and the bryozoan Membranipora membranacea compete for space on the kelp, whereas the bryozoan Electra pilosa also can be found on foliose red seaweeds.

This kelp forest most commonly occurs beneath a zone of Alaria esculenta and Mytilus edulis (Ala.Myt) and may contain small patches of A. esculenta. As the force of the wave-surge diminishes with increased depth, density of the faunal turf reduces and the kelp forest or park changes to one characterised by kelp and dense red seaweeds (LhypR.Ft or LhypR.Pk). In some areas of Shetland and St Kilda the lower infralittoral zone is characterised by a park of the kelp Laminaria saccharina and/or Saccorhiza polyschides (LsacSac). Where the L. hyperborea forest continues to depths of 15 m or greater it may give way to a zone of dense foliose red algae (FoR or For.Dic).

L. hyperborea kelp forest with very dense foliose red seaweeds. Although encrusting fauna are present it is less conspicuous than in LhypFa.

L. hyperborea kelp park with dense foliose red seaweeds; usually found beneath the kelp forest (LhypR.Ft) but can occur beneath LhypFa where wave surge is reduced. Lacks the dense faunal turf of LhypFa. 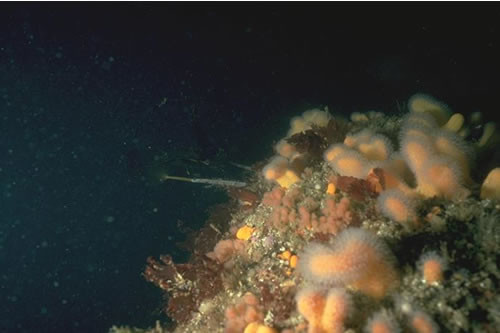 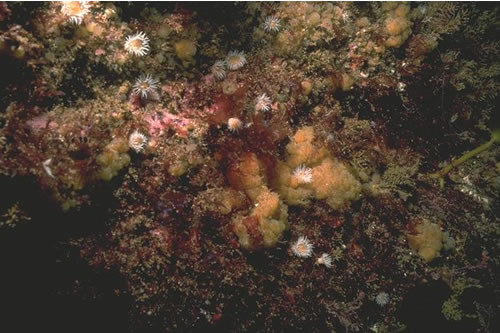 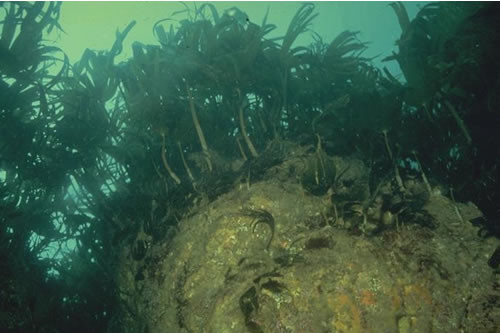