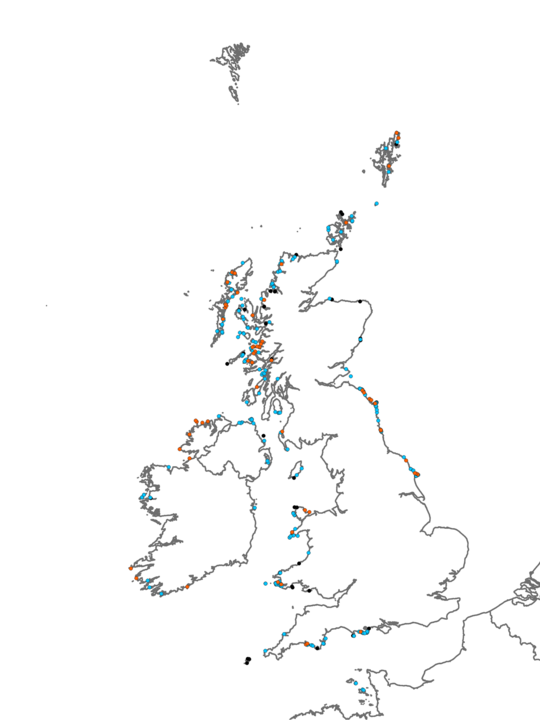 Below the dense kelp forest (Lhyp.Ft) on moderately exposed lower infralittoral bedrock and boulders, the kelp thins out to form a park. Beneath the kelp, the rock and kelp stipes are covered by an often dense turf of foliose red seaweeds such as Callophyllis laciniata, Plocamium cartilagineum, Delesseria sanguinea, Hypoglossum hypoglossoides, Cryptopleura ramosa, Callophyllis laciniata and Phycodrys rubens. Coralline crusts are often present on the rock surface. Many species of red seaweed found in this biotope occur at greater abundance in the shallower kelp forest. Other seaweeds, such as the red seaweeds Bonnemaisonia asparagoides and Hypoglossum hypoglossoides as well as the brown seaweed Dictyota dichotoma are more abundant in this zone than the upper infralittoral. The faunal component of this biotope is similar to that found below the kelp in the upper infralittoral zone and include the hydroid Obelia geniculata, the ascidian Clavelina lepadiformis, the anthozoans Urticina felina, Alcyonium digitatum and Caryophyllia smithii, the tube-building polychaete Pomatoceros triqueter and the gastropods Calliostoma zizyphinum and Gibbula cineraria. The gastropods Gibbula cineraria and Calliostoma zizyphinum and the echinoderm Echinus esculentus can be found grazing on the rock. Other echinoderms present include Asterias rubens and Antedon bifida which can be locally abundant, particularly in the north-west.

This biotope generally occurs below L. hyperborea forest (Lhyp.Ft) and marks the lower limit of the infralittoral rock. Occasionally a narrow band of foliose seaweeds (FoR) may occur below the kelp park but generally circalittoral biotopes are found.

The under-storey of foliose and filamentous seaweeds will diminish towards the autumn and regrow in the spring. When grazing urchins (predominantly E. esculentus) reach a large number in the kelp park their voracious grazing can substantially alter the community structure of the biotope, removing most of the seaweeds and leaving only coralline crusts on the rock. This is common around the coast of Scotland, particularly in Shetland and such sites should be recorded as Lhyp.GzFt.

Found above the kelp park and has a greater abundance of kelps but similar species composition.

Occurs in sites subject to accelerated tidal currents, generally with a more prominent filter feeder community. A larger variety of sponges such as Halichondria panicea and Esperiopsis fucorum, the bryozoans Alcyonidium diaphanum and Flustra foliacea and the barnacle Balanus balanus are found in greater abundance in the tide-swept kelp park.

Lacks the dense understorey of red seaweeds beneath the kelp canopy with the brown seaweeds D. dichotoma and Desmarestia spp. more prominent on the rock. The kelp stipes may still be covered with dense seaweeds but can also be bare from grazing. 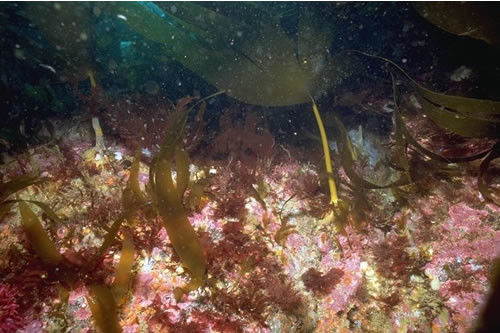