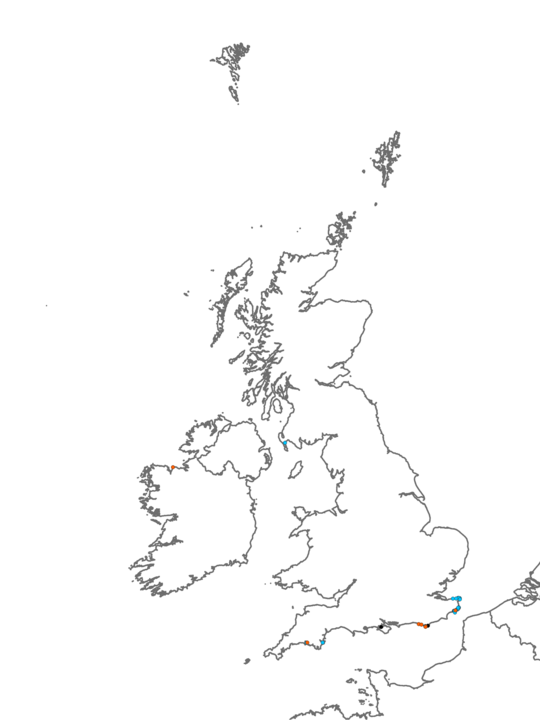 The lower eulittoral zone on soft rock shores (e.g. chalk) characterised by the wrack Fucus serratus. Much of the community associated with this biotope is the same as the biotope Fserr.FS, but certain taxa are specific to the soft underlying substrata. Rock-boring fauna including the piddocks Barnea spp., Pholas dactylus and Hiatella arctica can occur in dense aggregations. Burrowing polychaetes such as Polydora spp. can also occur in high numbers only visible due to their long, slender palps waving in the water as they occupy holes in the top few centimetres of the rock. A dense red algal turf occurs beneath the F. serratus and includes Gelidium pusillum, Osmundea pinnatifida, Palmaria palmata, Lomentaria articulata and Rhodothamniella floridula, but also calcareous algae such as Corallina officinalis and coralline crusts including the red-violet encrusting algae Phymatolithon lenormandii are present. Infaunal taxa such as various amphipods may be common amongst the seaweeds. The empty piddock holes may provide a refuge for species such as the anemone Actinia equina and the mussel Mytilus edulis while the barnacle Semibalanus balanoides, the limpet Patella vulgata can be present on the surface of the soft rock. The whelk Nucella lapillus, the winkles Littorina littorea and Littorina mariae and the top shell Gibbula cineraria are all present on the soft rock among the seaweeds. The high number of characterising species is partly caused by the low number of records used to define this biotope. The high % frequency of occurrence is partly a result of the low number of records. More data is needed to validate this biotope description.

This biotope usually occurs immediately below either a Fucus vesiculosus-barnacle mosaic (FvesB) or a Mytilus edulis and piddocks-dominated biotope (MytPid) on moderately exposed shores or a dense canopy of F. vesiculosus (Fves) or Ascophyllum nodosum (Asc.FS) on sheltered shores. The littoral fringe below are on moderately exposed shores dominated by the kelp Laminaria digitata (Ldig.Pid), while the kelp Laminaria saccharina may co-dominate on sheltered shores (Lsac.Ldig; Lsac.Ft).

Unknown, but probably as Fserr.FS

Occurs on hard bedrock. Has a similar species composition, but lacks the rock-boring piddocks such as H. arctica and P. dactylus or burrowing polychaetes such as Polydora spp.

Occurs on bedrock, but otherwise similar physical conditions. Has a similar species composition, but lack the rock-boring piddocks such as H. arctica and P. dactylus or burrowing polychaetes such as Polydora spp. The encrusting calcareous red algae Phymatolithon lenormandii are also missing. 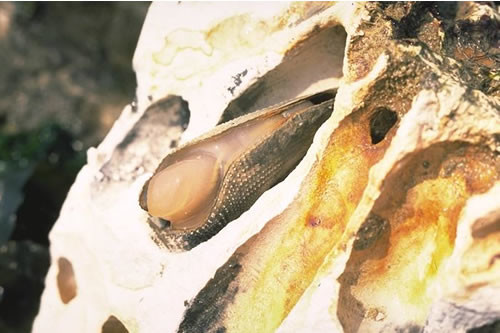