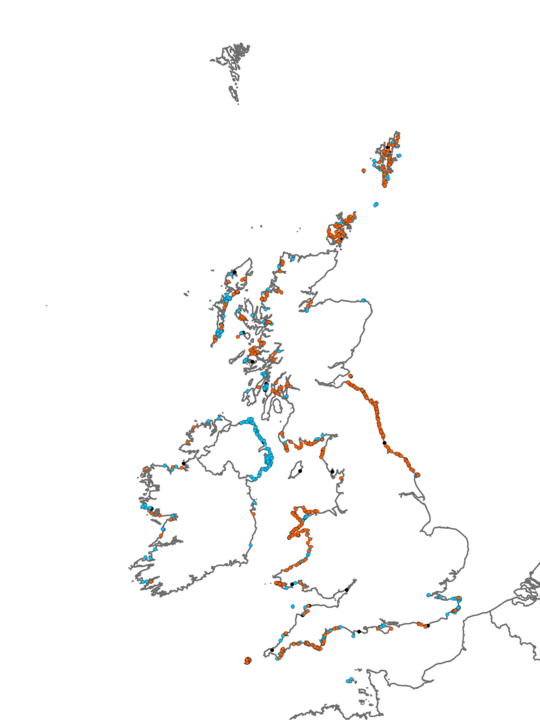 Moderately exposed rocky shores characterised by a mosaic of fucoids and barnacles on bedrock and boulders, where the extent of the fucoid cover is typically less than the blanket cover associated with sheltered shores. Other species are normally present as well in this habtat including the winkle Littorina littorea, the whelk Nucella lapillus and the red seaweed Mastocarpus stellatus. Beneath the band of yellow and grey lichens at the top of the shore is a zone dominated by the wrack Pelvetia canaliculata, scattered barnacles, while the black lichen Verrucaria maura covers the rock surface (PelB). Below, on the mid shore the wrack Fucus vesiculosus generally forms a mosaic with the barnacle Semibalanus balanoides and the limpet Patella vulgata (FvesB). Finally, the wrack Fucus serratus, dominates the lower shore, while a variety of red seaweeds can be found underneath the F. serratus canopy (Fser). A number of variants have been described: lower shore bedrock and boulders characterised by mosaics of F. serratus and turf-forming red seaweeds (Fser.R); where the density of F. serratus is greater (typically Common - Superabundant) and the abundance of red seaweeds less Fserr.FS should be recorded. The presence of boulders and cobbles on the shore can increase the micro-habitat diversity, which often results in a greater species richness. Although the upper surface of the boulders may bear very similar communities to Fserr.FS there is often an increase in fauna (crabs, tube-forming polychaetes, sponges and bryozoans) and Fser.Bo should be recorded. Sand-influenced exposed to moderately exposed lower shore rock can be characterised by dense mats of Rhodothamniella floridula (Rho).

Mid and lower eulittoral moderately exposed bedrock with a lichen zone above and a kelp dominated community below in the sublittoral zone.