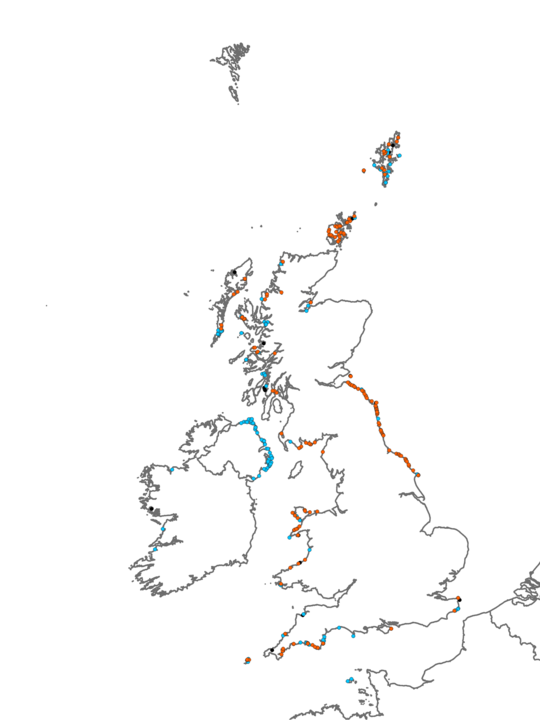 Moderately exposed lower eulittoral bedrock characterised by mosaics of the wrack Fucus serratus and turf-forming red seaweeds including Osmundea pinnatifida, Mastocarpus stellatus or Corallina officinalis. The hydroid Dynamena pumila can occur in dense populations on the F. serratus fronds whilst the sponge Halichondria panicea can cover the bedrock beneath. Underneath the canopy a number of other red seaweeds may be present including Palmaria palmata, Lomentaria articulata,Membranoptera alata and Chondrus crispus. Green seaweeds such as Cladophora rupestris, Enteromorpha intestinalis and Ulva lactuca are present though usually in small numbers. In addition, such shores provide a greater number of permanently damp refuges between the stones and underneath the seaweed canopy. Within these micro-habitats species such as the limpet Patella vulgata, the barnacle Semibalanus balanoides or the whelk Nucella lapillus can be found in lower abundance than higher up the shore. If a few boulders are present then the winkle Littorina littorea and the crab Carcinus maenas can be found on or underneath the boulders.

Above the F. serratus biotope on moderately exposed bedrock shores are the wrack Fucus vesiculosus and/or S. balanoides and P. vulgata dominated biotopes (Sem; Sem.FvesR; FvesB). The sub littoral fringe below on moderately exposed shores is dominated by the kelp Laminaria digitata and on vertical faces the kelp Alaria esculenta (Ldig.LdigBo; Ala.Ldig). On uneven bedrock F. serratus and red seaweeds often dominate the upper-facing surfaces, while steep or vertical rock is characterised by S. balanoides and P. vulgata dominated biotopes (see above).

Fluctuations from year to year in the abundance of the F. serratus and the red seaweeds due to factors such as severe storms may convert this biotope into either Fserr.FS or into a red seaweed dominated biotope. The C. maenas population may migrate offshore during the winter.

Occurs on large boulders and in a wider exposure range. Mobile species such as the crabs Porcellana platycheles and Cancer pagurus and the starfish Asterias rubens are present in low numbers.

Occurs on bedrock and boulders in very sheltered conditions. It has a very high species diversity and sponges such as Halichondria panicea and Hymeniacidon perleve and bryozoans such as Electra pilosa or Alcyonidium gelatinosum are characteristic for this tide-swept biotope. 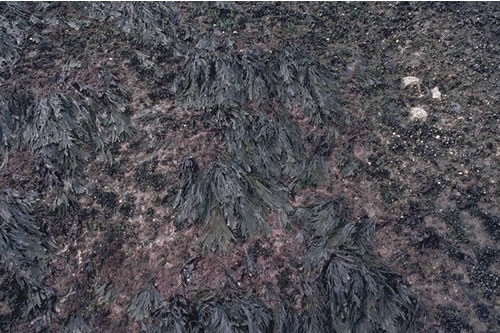 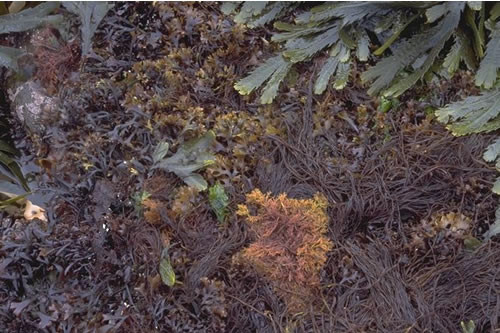