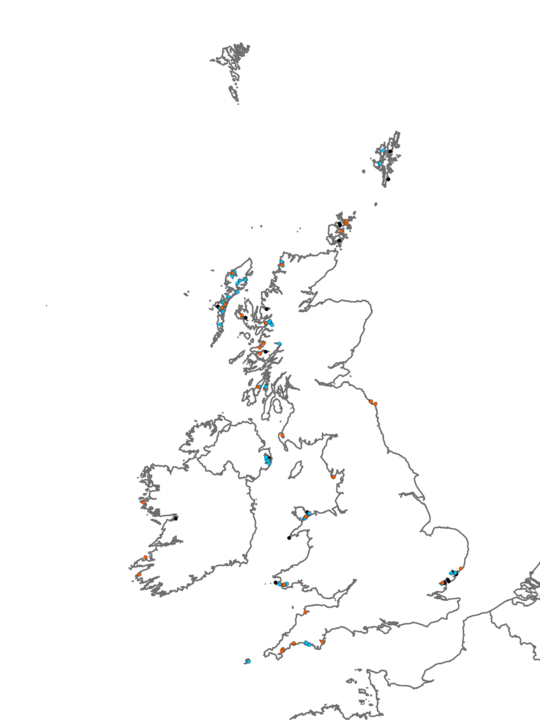 Sheltered to extremely sheltered lower eulittoral bedrock, boulders and cobbles that are subject to increased tidal water movement and characterised by the wrack Fucus serratus and a rich assemblage of filter-feeding fauna. This community is encouraged by the increased water movement. It includes species such as the sponges Halichondria panicea and Hymeniacidon perleve, which occur frequently on steep and overhanging faces. Underneath the F. serratus canopy is a diverse flora of foliose red seaweeds including Mastocarpus stellatus, Lomentaria articulata, Membranoptera alata and Chondrus crispus. The green seaweeds Cladophora spp., Enteromorpha intestinalis and Ulva lactuca and the wrack Ascophyllum nodosum are present though usually in small numbers. On the rock underneath the seaweed canopy, species such as the limpet Patella vulgata, the barnacles Semibalanus balanoides and Balanus crenatus and the whelk Nucella lapillus can be found though in lower abundance than higher up the shore. Also present on the rock are the tube-forming polychaetes Pomatoceros triqueter and spirorbids and more mobile species such as the winkles Littorina mariae and Littorina littorea, the top shell Gibbula cineraria and the crab Carcinus maenas. Lastly, several species of bryozoans are usually present including Electra pilosa and Alcyonidium gelatinosum, all competing for space with the hydroid Dynamena pumila, which can form dense populations on the F. serratus fronds.

Areas where increased tidal movement influences such a community are in the narrows and/or intertidal sills of Scottish sea lochs and the rias in south-west England. In the few cases where the rock is also subject to variable salinity, an impoverished community results and records should be classified as Fserr.VS rather than the present biotope.

Occurs on bedrock and boulders at a wide range of wave exposures. It also has a high species richness due to a diversity of micro-habitats. Mobile species such as Pisidia longicornis, Porcellana platycheles and Cancer pagurus are usually present.

Occurs on bedrock and in weak tidal streams. It has a lower species diversity and sponges such as H. perleve and hydroids such as Alcyonidium spp. and Electra pilosa are usually not present.

Occurs on variable salinity lower eulittoral bedrock and boulders. The individual M. edulis are large and the barnacle Elminius modestus can be present in high numbers. Sponges such as Halichondria panicea and foliose red seaweeds such as Lomentaria articulata or Chondrus crispus are absent. 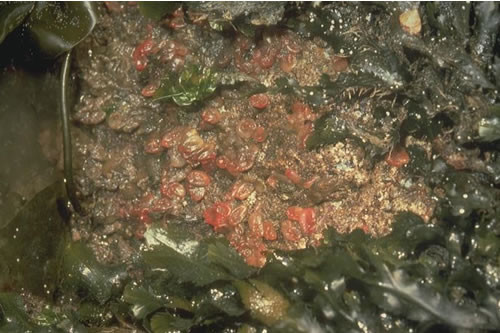