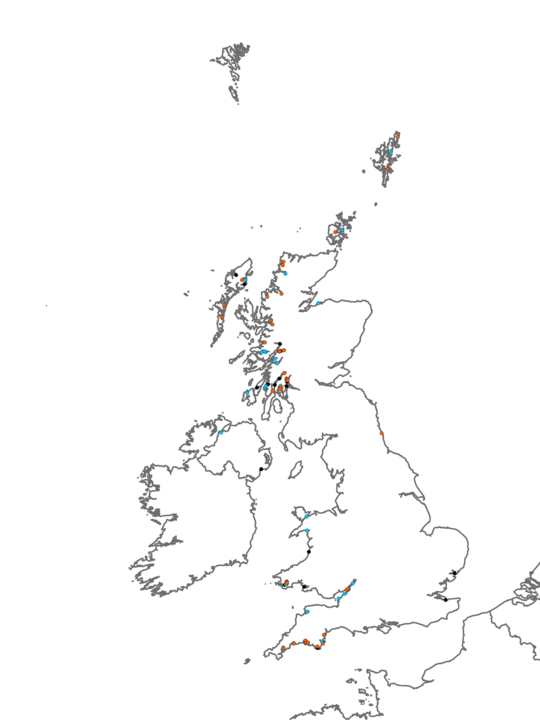 Areas of very sheltered lower eulittoral rock or mixed substrata subject to variable salinity, which support an impoverished community dominated by the wrack Fucus serratus. The hydroid Dynamena pumila can form colonies on the F. serratus and clumps of large individuals of the mussel Mytilus edulis may be present on the bedrock beneath. The canopy of F. serratus is not usually as dense as in the other F. serratus dominated biotopes due the presence of the wracks Ascophyllum nodosum and Fucus vesiculosus, which are better adapted to the variable salinity. A few red seaweeds are present which includes the species Mastocarpus stellatus, Chondrus crispus and coralline crusts. Underneath the canopy is a sparse fauna consisting of barnacles Semibalanus balanoides, Balanus crenatus and Elminius modestus, the limpet Patella vulgata or the occasional presence of the winkles Littorina obtusata and Littorina mariae and the crab Carcinus maenas. The tube-forming polychaetes Pomatoceros triqueter or spirorbid polychaetes can be found. In areas (such as the Scottish sea lochs) where variable salinity water passes through tide-swept narrows and the associated biota is impoverished such records should be classified as FserVS rather than FserT.

This biotope may be found below the variable salinity F. vesiculosus dominated biotope or A. nodosum dominated biotope (AscVS; FvesVS), particularly in Scottish sea lochs. FserVS can be found above the biotopes dominated by the kelp Laminaria saccharina (LsacVS.Psa; LsacVS.Phy).

The canopy of F. serratus is not as dense as in the other F. serratus dominated biotopes due the presence of the wracks A. nodosum and F. vesiculosus, which are better adapted to the variable salinity. They will therefore out-compete F. serratus on the lower shore and an ecological shift can occur (In the Baltic Sea F. vesiculosus is the dominant sublittoral brown seaweed). Due to the variable or low salinity conditions the individual red seaweeds may not be as large as specimens found in fully marine conditions and they can lack sexually reproductive structures.

Occurs in fully marine, moderately exposed conditions on bedrock. The species diversity and abundance of red seaweeds are high including species such as Palmaria palmata or Lomentaria articulata.

Occurs on bedrock and boulders at a wide range of wave exposures and full salinity. It has a high species richness due to a diversity of micro-habitats. Mobile species such as Pisidia longicornis, Porcellana platycheles and Cancer pagurus are usually present.

Occurs on bedrock and in fully marine conditions. It has a higher abundance of F. serratus, P. vulgata and Littorina spp.

Occurs in full salinity on lower eulittoral bedrock and boulders influenced by strong tidal streams. Filter-feeders such as hydroids D. pumila or the bryozoans Alcyonidium spp. are present. Sponges such as Halichondria panicea and foliose red seaweeds such as Lomentaria articulata or C. crispus are present.