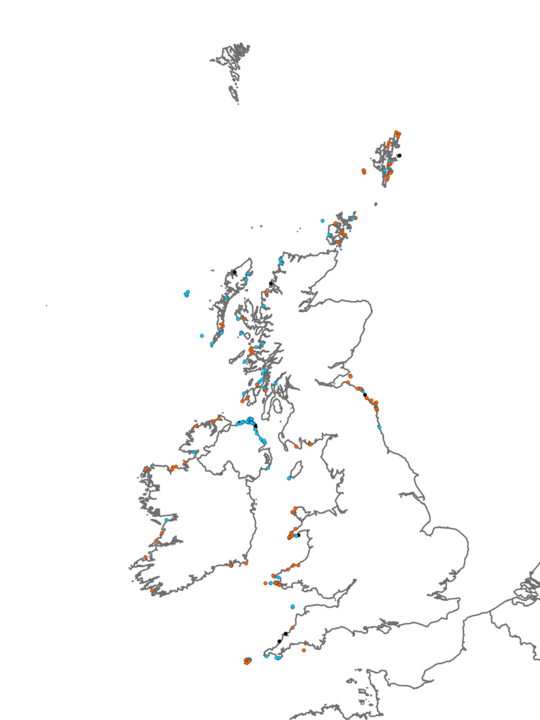 Exposed sublittoral fringe bedrock characterised by a mixture of the kelps Laminaria digitata and Alaria esculenta with an understorey of red seaweeds including Palmaria palmata and Corallina officinalis with encrusting coralline algal on the rock surface. Anthozoans such as Halichondria panicea, the mussel Mytilus edulis and the barnacle Semibalanus balanoides can be found attached in cracks and crevices. The limpets Patella vulgata or on southern shores Patella ulyssiponensis can be found in their characteristic "scars" grazing the biofilm/algal crusts on the rock surface, while the limpet Helcion pellucidum is restricted to grazing the kelp fronds. Colonies of the bryozoan Electra pilosa can cover the red seaweeds Mastocarpus stellatus and Chondrus crispus or the rock surface.

Ala.Ldig represents an intermediate on the wave exposure gradient, with pure stands of A. esculenta (Ala.Myt) being found on more exposed shores and pure L. digitata (Ldig) on more sheltered shores. This biotope usually occurs immediately above a sublittoral Laminaria hyperborea forest (LhypR or Lhyp), although a narrow band of L. digitata (Ldig) may occur between these two zones, particularly on less exposed shores. In southwest England a zone of mixed kelp forest L. hyperborea and Laminaria ochroleuca may occur below the A. esculenta (Lhyp.Loch). A number of different biotopes can occur above Ala.Ldig; most commonly these are the mussel-barnacle zone (MytB), Himanthalia elongata (Him), a red algal turf or a Fucus serratus-red algal mosaic (Fser.R) on the less exposed shores. This biotope also occurs on steep and vertical shores of moderately exposed coasts where a localised increase in wave action restricts the growth of L. digitata. As a result of this increased wave action the L. digitata plants are usually small and often show signs of damage.

There may be seasonal changes in the amount of ephemeral seaweeds due to disturbance caused by winter storms.

Occurs on more exposed shores. A. esculenta and M. edulis is abundant and Lithothamnion spp. is the dominant coralline crust. L. digitata is absent and the diversity of red seaweeds are lower.

Occurs on less exposed shores. L. digitata is the dominant kelp (Abundant), while the abundance of A. esculenta is low (Occasional).