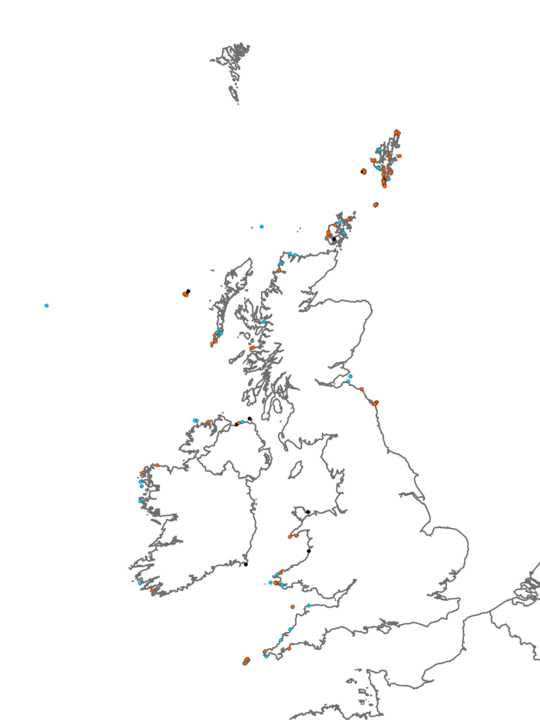 Very exposed sublittoral fringe bedrock characterised by the kelp Alaria esculenta and dense patches of small individuals of the mussel Mytilus edulis, both of which grow over a dense cover of encrusting coralline algae. Foliose red seaweeds may also be present, but the species composition and their abundance vary between sites. Species such as Corallina officinalis occur widely. The kelp Laminaria digitata is usually absent, although stunted plants may be present at a few sites. The limpet Patella vulgata and the barnacle Semibalanus balanoides are often common. Patches of anthozoans and the hydroid Tubularia spp. occur in more wave-surged areas. In extremely exposed areas the A. esculenta zone can extend as deep as 15 m, where it has less S. balanoides, M. edulis and greater densities of Tubularia spp. (e.g. Barra and shallow areas of Rockall).

This biotope is most commonly found beneath the mussel-barnacle zone (MytB) of very exposed shores and above the upper infralittoral Laminaria hyperborea forest (LhypR or LhypFa). It is at the extremely wave-surged sites, such as St Kilda, that LhypFa occurs below Ala.Myt. Occasionally, the A. esculenta zone occurs below a narrow but dense band of red seaweeds: typically Mastocarpus stellatus and/or Palmaria palmata and Corallina officinalis (Mas) or very occasionally Himanthalia elongata (Him). A dense turf of C. officinalis (Coff) occurs above the A. esculenta zone at a few extremely exposed sites, particularly on steep or vertical rock. On less exposed shores, however, an A. esculenta dominated zone may lie immediately above a narrow L. digitata zone (Ldig). Ala.Myt can also occur on less exposed steep or vertical shores, where wave-surge restricts the growth of L. digitata which generally dominates the sublittoral fringe rock on moderately exposed shores. On seasonally unstable boulders or sites subject to disturbance by strong wave-action, a mixed kelp canopy that characterises LsacSac may occur beneath the Ala.Myt zone instead of the ubiquitous L. hyperborea forest; this is most common on the Shetland isles.

At very exposed sites, A. esculenta may have been so wave-battered during the season as to be reduced to a tattered midrib with no blades, altering the general appearance of the biotope. Where Ala.Myt occurs on boulders and/or sites subject to disturbance during severe weather conditions, rock that is scoured clean may then be rapidly colonised by fast-growing green algae such as Enteromorpha spp. An assemblage of rapidly colonising species that characterise the disturbed Sac biotope may also develop in the sublittoral fringe. A species that can fluctuate in huge numbers at these sites is the starfish Asterias rubens, sometimes forming dense aggregations across the narrow A. esculenta band whilst feeding on the mussels.

Occurs on less exposed shores. A. esculenta and M. edulis occurs at a lower abundance and Lithothamnion spp. is not usually present. L. digitata is present in high abundance and the diversity of red seaweeds are high.

Occur on very exposed bedrock shores. Dense anthozoans including Corynactis viridis and Phellia gausapata and sponges such as Haliclona urceolus and Myxilla fimbriata can be present. Ala.Myt is distinguished from the deep A. esculenta forest found on Rockall by its lack of short turf forming hydroids. 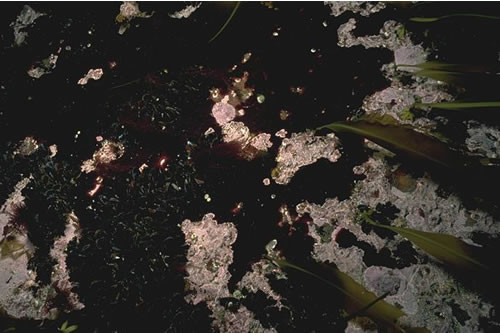 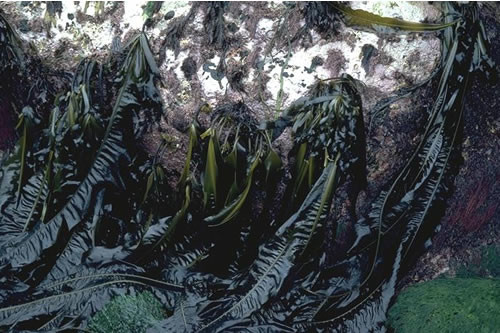