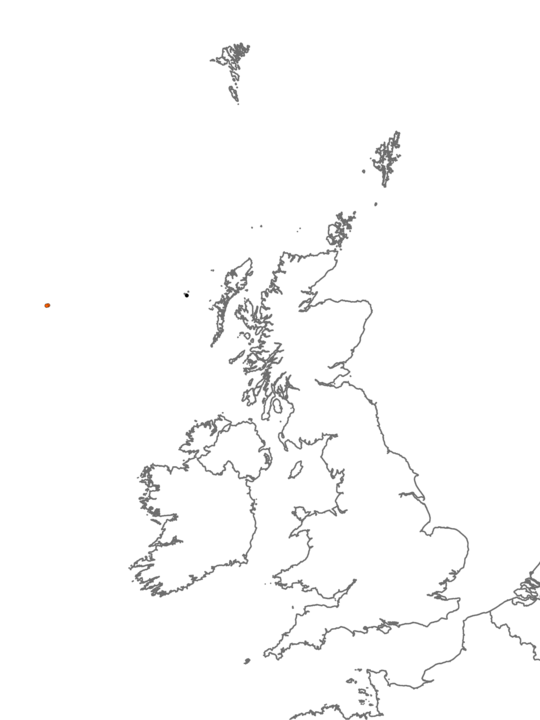 This biotope has only been recorded from Rockall, where Alaria esculenta appears to replace Laminaria hyperborea as the dominant kelp forest species on the extremely wave-exposed steep and vertical rock, a zone that extends from 14 m down to 35 m. Beneath the A. esculenta canopy, the rock surface is covered by a dense turf of anthozoans such as Sagartia elegans, Phellia gausapata and Corynactis viridis, encrusting sponges and coralline algae. The gastropod Margarites helicinus can be found grazing on the kelp fronds, whereas the crab Cancer pagurus can be found among the kelp stipes. The bryozoan Tubularia indivisa also occur, but it does not form such a dense turf as in more shallow waters, while the ascidian Botryllus leachi is found encrusting the large brown seaweeds. Cryptopleura ramosa is the dominant red seaweed on horizontal surfaces. The kelp Laminaria digitata is reported to occur mixed with A. esculenta on the nearby Helen's reef.

Above the AlaAnSC zone (about 5 m to 13 m) A. esculenta still dominates, but it resembles more closely the typical sublittoral fringe A. esculenta biotope (Ala.Myt), though it has a very dense turf of small hydroids and few foliose algae. Towards the lower part of this A. esculenta forest (30 m to 35 m), the density of A. esculenta is reduced and the rock surface is characterised by a dense turf of red algae (FoR).