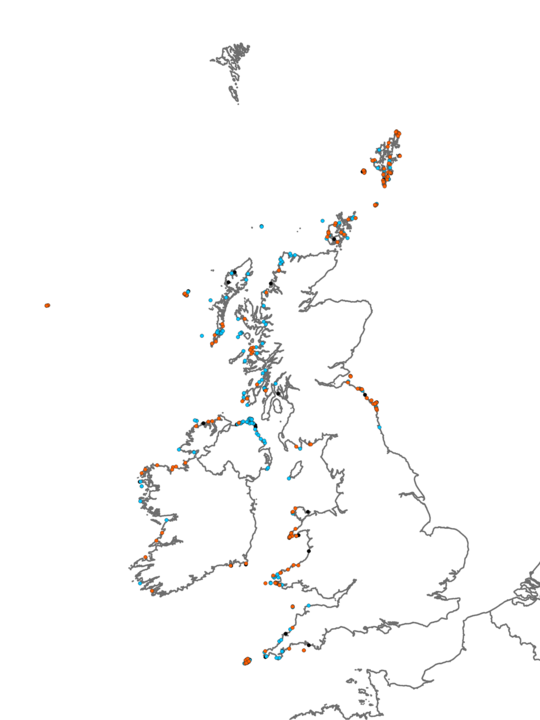 Exposed sublittoral fringe bedrock with an Alaria esculenta forest and an encrusting fauna of the mussel Mytilus edulis and barnacles such as Semibalanus balanoides. The kelp Laminaria digitata can be part of the canopy. Underneath the canopy are red seaweeds such as Mastocarpus stellatus and Palmaria palmata, while encrusting coralline red algae such as Lithothamnion graciale covers the rock surface. The limpet Patella vulgata can be found grazing the rock surface, while the whelk Nucella lapillus is preying on the limpets, barnacles and mussels. Two variants of this biotope are described. In more wave exposed conditions Laminaria digitata is absent and the rock surface is often characterised by dense patches of mussels (Ala.Myt). In slightly less exposed sites the A. esculenta is mixed with L. digitata (Ala.Ldig).

This biotope is found in the sublittoral fringe on exposed shores, typically occupying the extreme lower shore down to 1 or 2 m depth, although it can also extend down to 15 m depth on very exposed coasts. It is generally found below the mussel-barnacle zone of the lower shore (MytB) or a narrow band of the seaweed-dominated biotopes featuring dense Himanthalia elongata or red seaweeds (Him, Mas). Below the A. esculenta zone, the upper infralittoral rock generally supports a Laminaria hyperborea kelp community (LhypFa, LhypR.Ft or Lhyp.Ft). 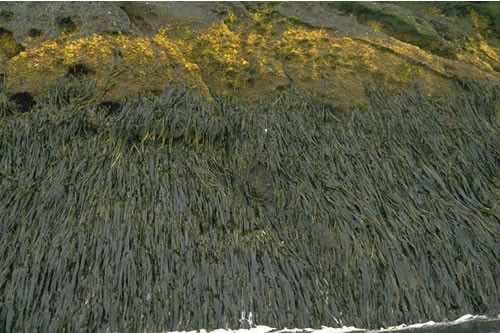